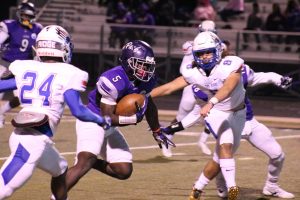 Coming off their biggest win of the season, the Lufkin Panthers showed it was no fluke as the offense racked up almost 500 yards of offense and the defense forced six turnovers on their way to a dominating 34-7 win over the Oak Ridge War Eagles on homecoming night at John Outlaw Memorial Field at Abe Martin Stadium Friday night.

Isaiah Phillps carried the load for Lufkin’s ground game with 172 yards and three touchdowns on 23 carries.

“I thought we ran the ball well and that set everything else up,” Lufkin head coach Todd Quick said. “I’m proud of our running backs and I’m proud of our offensive line. We blocked their butt from the first play on.”

On the defensive side, Lufkin kept up its stellar play in holding Oak Ridge to 41 total yards after half. For the night, Oak Ridge had 241 yards, led by QB Blane Romero, who threw for 170 yards and a touchdown on 16-of-25 passing.

The story of the night was a defense that recovered four of the six fumbles it forced and also intercepted two passes.

“The kids went out there and got the ball on the ground,” Quick said. “We were proud of that. They didn’t overplay themselves in the second half.”

In the first 24 minutes, an opportunistic Lufkin defense that forced four turnovers was the key in giving the Panthers a 20-7 lead.

Lufkin started the game with a flurry as it forced a three and out on Oak Ridge’s first drive then watched a punt sail against the wind and out of bounds for eight yards to give the Panthers good field position.

The Panthers capitalized with a Rodrigo Molina 38-yard field goal for an early 3-0 lead.

Lufkin forced a turnover that appeared to end a deep Oak Ridge penetration before fumbling the ball right back on the return.

Oak Ridge made the most of that miscue with Blane Romero hitting Tanner Lacy for a short pass before he broke a tackle and finished a 28-yard touchdown that gave the War Eagles a 7-3 lead.

The Pack answered quickly with Thomas hitting Jackson for a 40-yard pass that set up an Isaiah Phillips 21-yard touchdown, giving the Panthers the lead back at 10-7 late in the first quarter.

Lufkin’s defense came up with a pair of big plays with March Thomas recovering a fumble before Breylon Garcia had a sack to force a turnover on downs.

The Panthers got their offense going once again when Jackson made a nice 33-yard catch on a third and 15 from their own 15. That helped set up a Phillips’ three-yard touchdown run that capped a 12-play, 83-yard drive that upped the margin to 17-7.

Savon Fields recovered a fumble on the next drive and Molina kicked a 29-yard field goal into a stiff wind in the final minute of the second quarter for a 20-7 advantage.

In the opening half, Oak Ridge gained 200 yards of offense but fumbled five times, losing the ball on four different occasions.

Lufkin was led by Jackson, who caught six passes for 136 yards. Thomas completed 12-of-18 passes for 190 yards.
On the ground, Phillips led the way with 59 yards and two touchdowns on 12 carries.

Blane Romero led the way for the Oak Ridge offense, completing 10-of-12 passes for 136 yards and a touchdown.

After Phillips had a 64-yard touchdown run taken off the board on a holding penalty, the offense got going on their next possession.

Facing a fourth and five, Thomas hit an open Jackson, who finished off a 35-yard touchdown reception for a 27-7 lead with 7:28 left in the third quarter.

That lead grew to 34-7 with Tre Grant running in for a two-yard touchdown with 8:54 left in the game.

Lufkin (6-2, 3-1) will return to action on Friday night when it travels to take on Conroe.