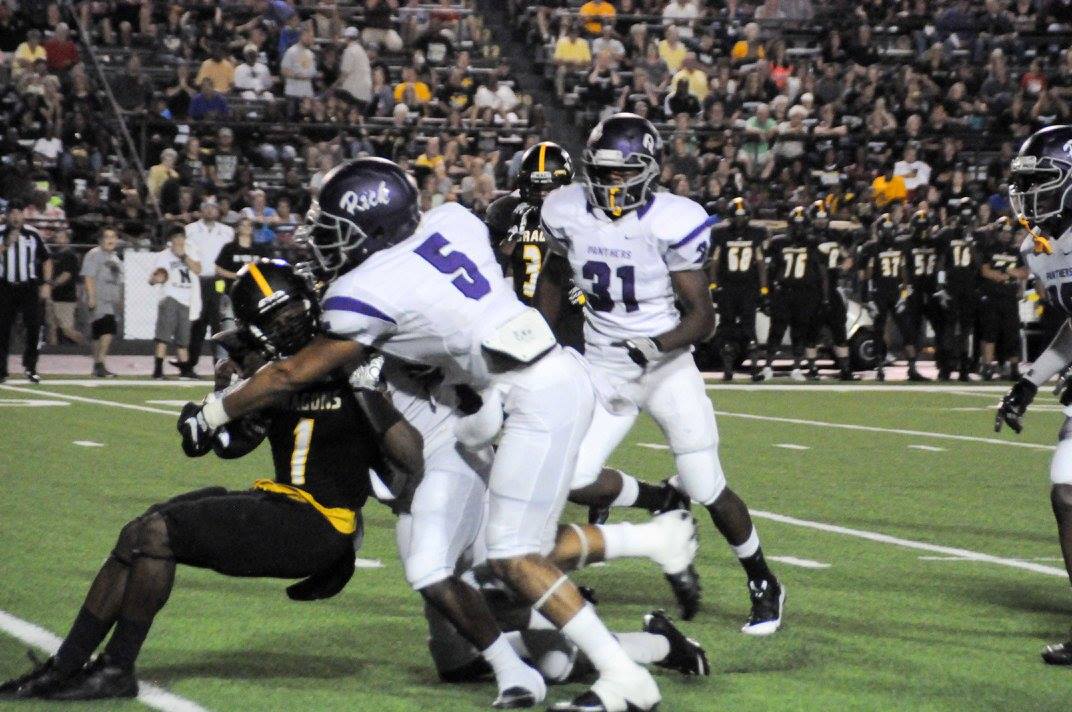 The Nacogdoches Dragons spent most of Friday night showing just how far they have come since Bobby Reyes took over the program. From a perennial bottom feeder to one that expects to make the playoffs, the Dragons played like a team that expected to beat Lufkin.

In the end, even with some key Lufkin miscues, it wasn’t quite enough. On a night that Lufkin showed flashes of being a legitimate contender, it also made enough mistakes to allow the Dragons to stay in the game.

In the end, it didn’t matter as the Panthers escaped Nacogdoches with a 42-28 win, ending a brief two-game losing streak at Dragon Stadium.

“That’s definitely not the same type of team we used to see when we played Nac,” Lufkin head coach Todd Quick said. “Their whole program has changed over the last few years. You’re going to have to fight to beat them.”

Lufkin had plenty of fight in them despite some key mistakes. On the offensive side, Lufkin had a miscue on a snap for the second straight week.

This time it came on the opening offensive play as a snap got past Kordell Rodgers. The Panthers’ third turnover came when it was on the verge of finally putting the Dragons away.

In the end, those turnovers didn’t prove costly, although Quick insists plays like that have to be cleaned up in order for the Pack to compete against the best competition it will see.

“We were busy shooting ourselves in the foot for a lot of the night,” Quick said. “We tried to make things difficult.”
In between those mistakes, there was a lot to like about the Lufkin offense, which put up 42 points while piling up 506 total yards of offense.

Kordell Rodgers led the offensive attack by throwing for 351 yards and three touchdowns.

Lufkin also showed off a dynamic set of wide receivers with Javante Ellington leading the way with six catches for 115 yards and a touchdown. Dhailon Phillips just missed on the 100-yard marker with five catches for 99 yards while Malik Jackson had six catches for 73 yards. Breylon Garcia had a nice grab that helped set up a Panthers’ score just before the half.

The Panthers were far from one dimensional as Khalil Brown ran for 173 yards and three touchdowns on 25 carries just a week after he suffered an injury scare.

“That’s a bunch of yards and honestly it could have been more,” Quick said. “Teams have to pay attention to a lot of guys on that side.”

Meanwhile the defense had its ups and downs for the second straight week before taking over down the stretch. After Nacogdoches pulled within 35-28 with 2:28 left in the third quarter, the Panthers kept the Dragons off the board, allowing the offense to tack on one more insurance touchdown.

Nacogdoches finished the night with 362 total yards with Phillip Jones rushing for 130 yards on 31 carries. It was the second straight week an opposing running back went over the 100-yard marker.

“It wasn’t perfect, but the kids fought hard,” Quick said. “We can get better.”

On special teams, Lufkin came up with a big play for the second straight week. This time it came after the early turnover, keeping Nacogdoches off the board in the early going.

Rodrigo Molina missed on a field goal for the second straight week but connected on all six extra points and also added a 48-yard punt on his only attempt.

Lufkin will get an extra day of rest this week before hosting Parkway on Saturday afternoon. That game will be part of the Battle on the Border at Shreveport’s Independence Stadium at 4 p.m.