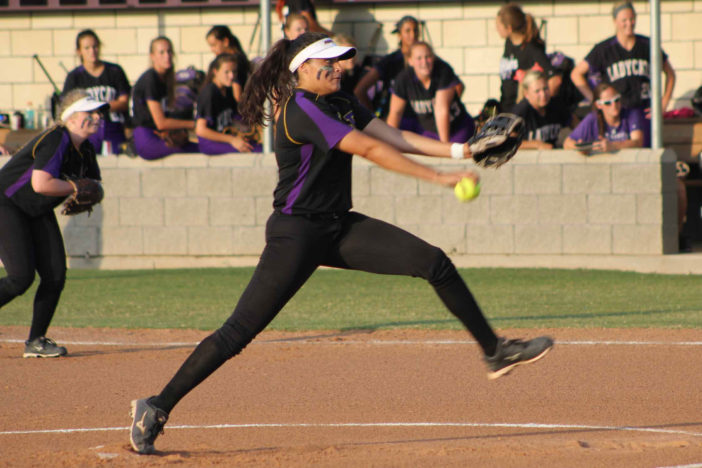 Lady Panther Alex Flores winds up for the pitch against the Hallsville LadyCats. Flores’ RBI on a triple and the 7th inning strike out secured the 1-0 win for Lufkin. (Photo: Bethany Baldwin | MSGPR)

With the third-ranked Hallsville Ladycats in town for the opening game of a Class 4A Region III Quarterfinal series on Thursday night, Lufkin’s Alex Flores did it all for the Lady Pack.

The senior pitched a shutout in the circle and delivered the only RBI of the game on a triple as the Lady Panthers took a 1-0 lead in the series with a 1-0 win over Hallsville at Morris Frank Park.

With the teams struggling to get on the board, Flores roped an RBI triple to left field in the fourth inning that plated Yami Valdez for the only run of the game. From there, Flores and the Lady Panthers’ defense made that run hold up on their way to a narrow victory that moved the Lady Panthers to 5-0 in the postseason while handing Hallsville just its third loss of the entire season.

In the complete game effort, Flores pitched a four-hitter while walking just one batter. She also struck out nine against a potent Ladycat offense.

That was enough to outduel Hallsville pitcher Madison McElroy, who allowed one run in six innings.

Lufkin got its only run of the game in the fourth inning when Valdez walked and the next two batters were retired. Flores then came through with the clutch triple to left field for the game’s only run.

Hallsville had possibly its biggest scoring threat of the game in the sixth inning, putting two runners on base before Jasmine Ibarra made a nice catch to start an inning-ending double play.

In the seventh inning, Flores worked around one hit to strike out the side and preserve the win.

Lufkin improved to 33-3 on the season with the win while Hallsville fell to 32-3.

Lufkin, the fourth-ranked team in Class 5A, will now need to pick up a road win to advance to the regional semifinals. Game two of the series is set for tonight at 7 in Hallsville. A third game, if necessary, would be held on Saturday afternoon at 2, also in Hallsville.