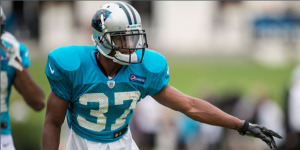 CHARLOTTE – Whether you’re a member of the practice squad or the 53-man roster, practice is pretty much the same experience.

But for rookie linebacker Horace Miller

, his first practice as a member of Carolina’s 53-man roster felt different even if it didn’t look different.

“It was definitely exciting, knowing that my hard work has been noticed,” said Miller, who was promoted along with cornerback Carrington Byndom

“But I was all smiles. It was pure enjoyment.”

The Panthers are hoping that type of youthful energy will pay off come game time for a team mired in a six-game losing streak. Miller said he got first-team reps on kickoff return and was in the rotation on the punt team Wednesday, while Byndom said his role was more up in the air.