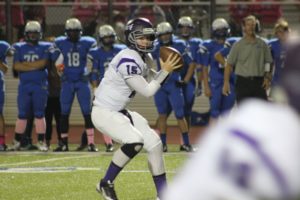 Trey Cumbie draws back for a pass during a game against Lindale in October 2014, leading the Pack to a 63-28 against the Eagles. (Photo: MSGPR)

Former Lufkin Panther Trey Cumbie is making waves for the Houston Cougars’ baseball team. On Tuesday night, he put together one of the highlights of his season by throwing eight shutout innings in a crosstown matchup against the 13th-ranked Rice Owls.

Cumbie, who was a starting quarterback and pitcher for the Panthers just a year ago, baffled Owls’ hitters by allowing no runs on five hits with a walk and five strikeouts in the Cougars’ 10-0 victory at Rice’s Reckling Park.

It was just the third career start for Cumbie, who has seen action for the 28-19 Cougars throughout his freshman season.
Following the game, Houston head coach Todd Whitting had high praise for the former Panther.

“Trey Cumbie was outstanding,” Whitting said in an interview that was quoted on the Cougars’ Web site. “He threw a shutout against a really good Rice team. He showed a lot of poise for a freshman, and that is going to be big for us going forward.”

Bubba Maxwell pitched the final inning to close out a combined shutout after Cumbie threw 69 of his 101 pitches for strikes in eight innings.

The win moved Cumbie’s record to 3-2 on the season. In 12 appearances this season, Cumbie has a spectacular ERA of 1.51. In 41 2/3 innings of work, he has allowed 10 runs, seven earned, on 29 hits with only five walks. He also has 46 strikeouts and has held opponents to a .197 batting average on the season.

Houston is in the closing stages of its regular season as it will travel to Cincinnati this weekend before hosting Rice on Tuesday. The Cougars face Tulane next weekend before playing in the American Championship from May 24-29.