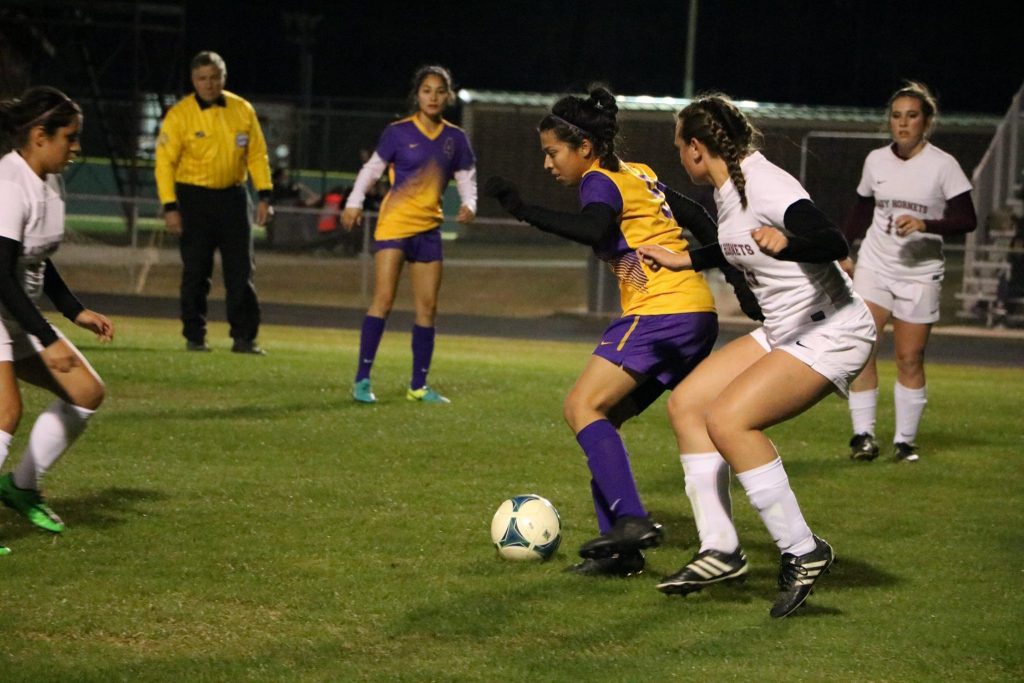 After falling in a 2-0 hole in the closing minutes of the first half, the Lufkin Lady Panthers’ soccer team came storming back on their way to a thrilling 3-2 win over the Jacksonville Lady Maidens on Tuesday night.

Kaela Stripling pulled the Lady Panthers even with a pair of goals, and Julie Muniz scored the game winner in the comeback victory.

In the early going, it looked like it would be a rough night for Lufkin as it allowed two goals in the last six minutes of the second half to fall in a 2-0 hole.

Lufkin finally found the back of the net with 25 minutes left when Stripling scored off a rebound on a penalty kick, trimming the margin to 2-1.

The Lady Panthers finally pulled even with 10 minutes left when Stripling scored off another rebound, this one on a free kick, that made the score 2-2.

Muniz then converted the game-winning goal with three minutes remaining, giving the Lady Pack a 3-2 victory.

In JV girls’ action, Lufkin dropped a 2-1 decision to Jacksonville.

The Lady Panthers will have Friday night off before traveling to College Park for the District 12-6A opener on Feb. 7. The JV girls game is slated for a 4 p.m. start with the varsity following at 6.

On the boys’ side, Lufkin battled to a 0-0 tie at halftime before the Nacogdoches Dragons came alive late for a 4-0 victory in Nacogdoches.

Nacogdoches scored on a pair of penalty kicks early in the second half then added a pair of goals, including one in the final five minutes, for the victory.

In JV boys’ action, Lufkin and Nacogdoches battled to a 0-0 tie.

The Panthers will have Friday night off before starting district action at home against College Park on Feb. 7. The JV game will start at 4 p.m. with the varsity following at 6.