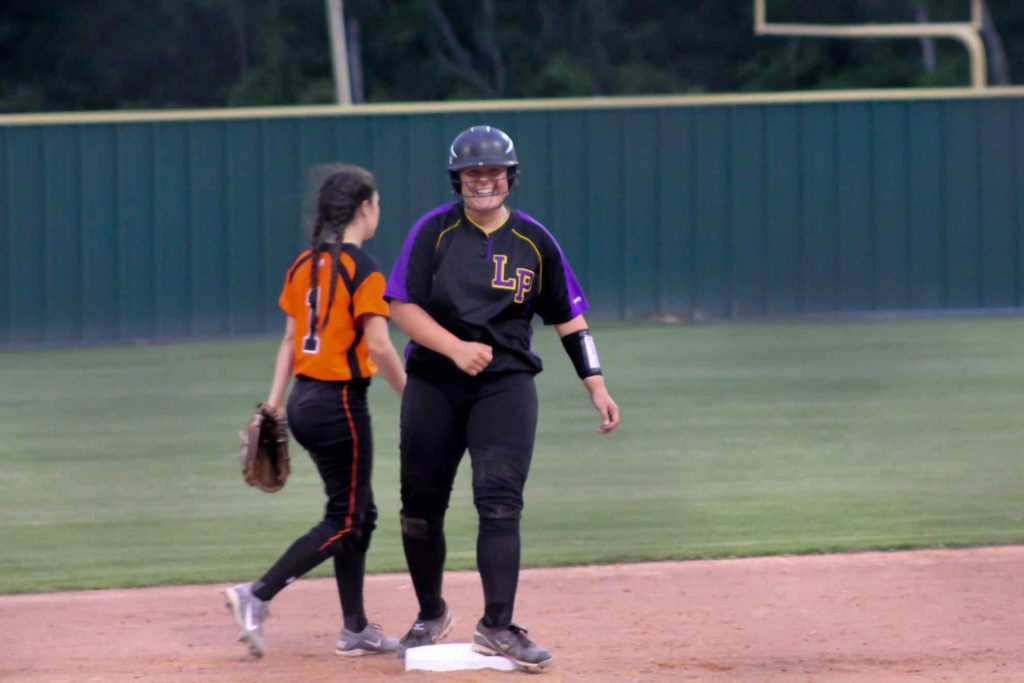 Lufkin Panther Catcher Sara Mayes celebrates after a double in the third inning before a lengthy rain delay. The Lady Pack would go on to win against Texas High 10-3. (Photo: Misty Boggs)

A two-run deficit and a nearly three-hour rain delay weren’t enough to keep Lufkin out of the area round of the playoffs as the Lady Panthers rallied for a 10-3 win over the Texas High Lady Tigers on Friday night.

The win capped a two-game sweep for the Lady Pack, which also took a 7-4 win in Texarkana on Thursday night.

Things didn’t come easy for the Lady Pack on Friday night. Facing a rainy forecast, Lufkin scored the first run before falling in a 3-1 hole. However, Lufkin used a three-run rally to take the lead just before the lengthy delay due to lightning in the area.

Then after waiting out the weather, Lufkin struck for six sixth-inning runs to end any hopes of a Texas High comeback.

Alex Flores got the win in the circle by pitching a complete game while striking out six batters.

She had plenty of help from her hitters. Jasmine Ibarra had a triple and a double and Yami Valdez had a double, single and drove in five runs.

Sara Mayes and Cailee Hendrick each had a double and a single. Reagan Jordan added a pair of singles.

The Lady Panthers jumped out to a 1-0 lead when they took advantage of a Texas High error.

Texas High came back with three runs in the third inning to capture a 3-1 advantage.

Then with the lightning getting closer, Lufkin seized the momentum just before the long delay. Jordan pulled the Lady Pack within a run on an RBI single and Valdez delivered a two-run single that made it 4-3.

Lufkin scored on an error, and Hendrick had an RBI single before Valdez delivered a bases-clearing triple that essentially put the game away.

Ibarra followed with an RBI triple that made the score 10-3.

That capped off a series sweep after Lufkin captured a 7-4 win over Texas High on the road Thursday night. Flores highlighted the win by leading the Lady Pack both in the circle and at the plate. In addition to getting the win, she also hit a homer to go along with two singles.

With the win, Lufkin improved to 30-3 on the season. The Lady Panthers advance to take on Mansfield Timberview in the area round of the playoffs.

A date, time and site for that playoff is to be announced.