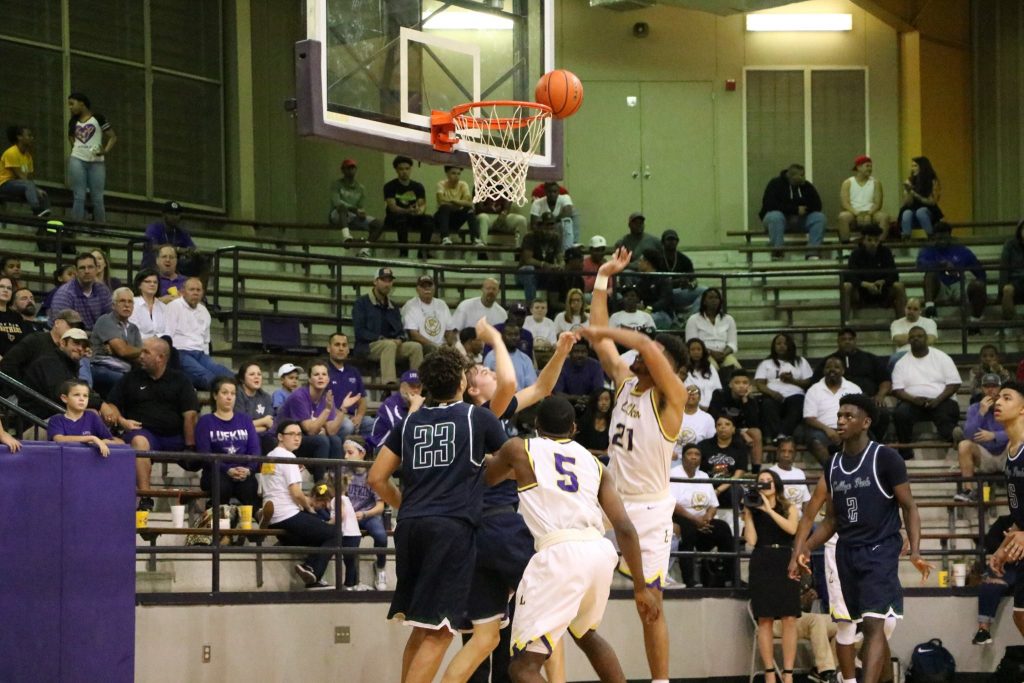 With the Lufkin Lady Panthers and College Park Lady Cavs matching up in a battle of 12-6A heavyweights, fans came to Panther Gym expecting an all-out slugfest. Instead the Lady Pack delivered a first-round knockout to College Park, scoring the first 14 points and never being tested in a resounding 64-25 win.

Alexis Hood and Kurstyn Harden scored 16 points apiece and the Lady Panthers led by double digits for the final 28:47 to pull into a first-place tie with College Park and Oak Ridge.

The win also avenged an earlier 59-43 loss to College Park, just one of two setbacks in district action.

This one was never in doubt after Lufkin’s pressure defense overwhelmed a seemingly shell shocked College Park team from the opening tip.

Lufkin scored the only points of the first 2:30 of the game when Harden converted a three-point play.

The points then came in a flurry for Lufkin as it scored 11 points in a span of 1:15.

Alexis Hood worked her way for a layup before Lufkin forced College Park turnovers on the next four possessions, leading to easy scores each time.

Harden converted three of those turnovers into layups and JaKayla Suell had a three as the lead ballooned to 14-0 with 4:26 left in the first quarter.

College Park answered with three points before Suell, who finished with 10 points, knocked down her second three-pointer and Jada Johnson made a layup for a 19-3 lead after the opening eight minutes.

The Lady Cavs tried to work their way back into the game in the second quarter, trimming that margin to 23-11.

That was as close as they got as the Lady Pack answered with a 21-1 run that spanned eight minutes between the second and third quarters.

Harden started the run with back-to-back buckets in the paint before Hood and Keke Cleveland had scores to make it 31-11.

After a College Park free throw, Hood made a free throw and Cleveland made a jumper for Lufkin to finish the half with a 34-11 advantage.

Lufkin didn’t slow down from there as it scored the first 10 points in the third quarter. Ivie Massie started the run with a triple and Hood scored the next seven points for an insurmountable 44-12 advantage.

In the fourth quarter, the Lady Panthers continued to stretch out that margin, leading by as many as 40 points after a Diamond Johnson layup before capturing the 64-25 win.

College Park 78, Panthers 45 – On the boys side, it was a long night for the Pack as the College Park Cavaliers avenged an earlier loss by pounding the Panthers, 78-45, in District 12-6A action.

Lufkin entered the night in a first-place tie in the district but fell for the second straight time after a 4-0 start to district action.

Lufkin trailed by just four points at the half but was outscored 30-5 in the third quarter as College Park opened it up on the way to a lopsided win.

The Panthers will finish off a stretch of three straight road games when they travel to face Conroe on Friday night.