Pieces fall in place for Lufkin series with Monterrey
Lufkin vs. Monterrey – Ambit Energy Game of the Week is online! 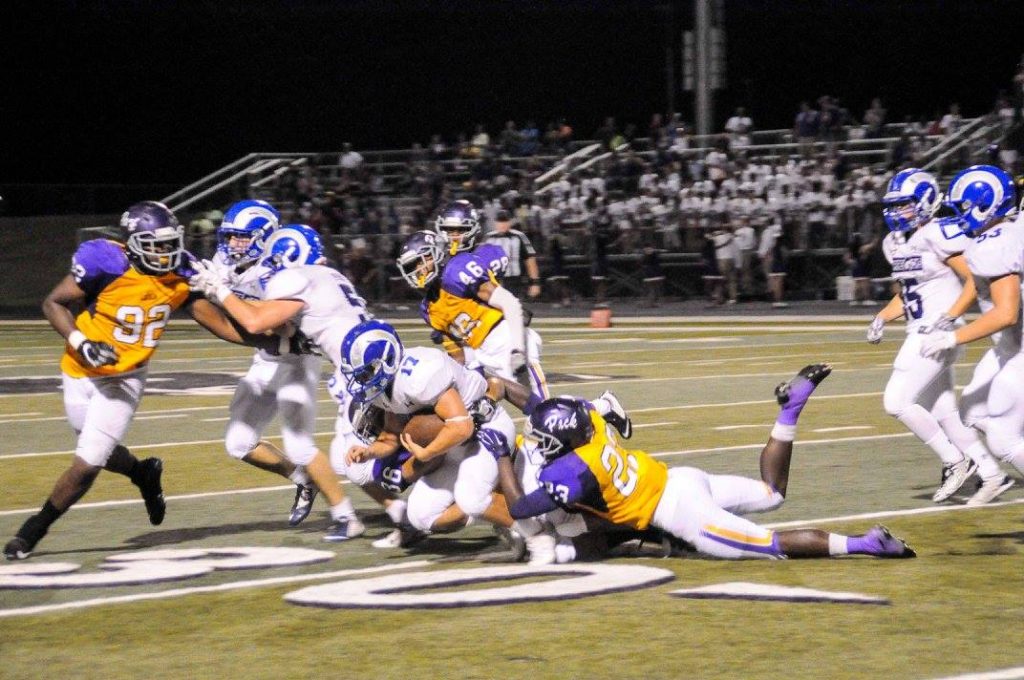 With the novelty of facing an international team under the Friday Night Lights, the Lufkin Panthers reverted to their style of East Texas football to steal the show, overcoming a slow first half before a dominating final 28 minutes on their way to a 35-7 win over the Monterrey Prepa Tec Borregos in the non-district finale at John Outlaw Memorial Field at Abe Martin Stadium Friday night.

With the stands packed with Lufkin fans on both sides, the Panthers were unable to seize any early momentum in a first half in which they were held to 93 yards.

When it emerged from the locker room, the Panthers seemed like a different team, opening up the passing game to open up the score on their way to an easy win.

Kordell Rodgers had another big game for the Pack, throwing for 313 yards on 15-of-23 passing with no interceptions.

Malik Jackson caught three passes for 109 yards and a touchdown and Dhailon Phillips had two catches for 117 yards and two touchdowns.

Lufkin’s defense was much improved from a week ago, holding Monterrey to 243 total yards and seven points.

In the first half, the Lufkin offense that was nearly unstoppable a week early was in neutral for the first 24 minutes, gaining just a total of 93 yards.

However, the defense was able to hold up its end of the bargain this time, holding the Borregos to 95 total yards.

After each team went three and out on their opening drive, a Monterrey special teams miscue gave Lufkin the chance to get on the board early as a shanked punt gave the Panthers the ball at the Monterrey 48.

Five plays later, Rodgers hit Beau Atkinson over the middle for a 20-yard touchdown pass and a 7-0 lead.

The defenses took over from there as the next four drives ended in punts.

Monterrey’s offense finally had its only sustained drive of the opening half with the help of some Lufkin miscues.

The Panthers had a pass interference on third and long then roughed the passer on fourth down to give Monterrey the chance to keep the drive alive.

The Borregos eventually took advantage with Carlos Avila scoring on a two-yard touchdown run that knotted the game at 7-7 with 4:08 left in the first half.

That seemed to wake up the Lufkin offense that answered by putting together its best drive of the first half.

Lufkin capped off a 10-play, 75-yard drive with Brown powering in for a one-yard touchdown run that gave the Panthers a 14-7 lead.

The Panthers’ special teams came up with a big play when a pooch kick was recovered by Lufkin’s Zamarion Johnson inside Monterrey territory.

However, a sack and a pair of penalties kept Lufkin off the board as it went into halftime with a 14-7 lead.

The Panthers had no such struggles after the break when a potential Monterrey touchdown pass was dropped.

Lufkin receivers had no such problems in catching the ball with Phillips first catch coming on a 37-yard scoring strike that finally gave the Pack a two-score lead at 21-7.

After another Lufkin stop, it was Phillips that made the play once again, this time taking a short pass and racing for an 80-yard touchdown and a 28-7 lead.

Monterrey answered with a pair of long runs from QB Victor Puentes before Za’Courtney Deason came up with an interception near the end zone to preserve the 21-point lead.

That advantage grew to 28 points just two plays later with Malik Jackson doing the damage this time as he took a short pass and easily outsprinted the Monterrey defense for an 85-yard score that made it 35-7.

With that play, Lufkin emptied the bench for the final half of the fourth quarter.

Lufkin (3-1) will be back in action for homecoming on Friday night, hosting College Park in a game set for a 7:30 start