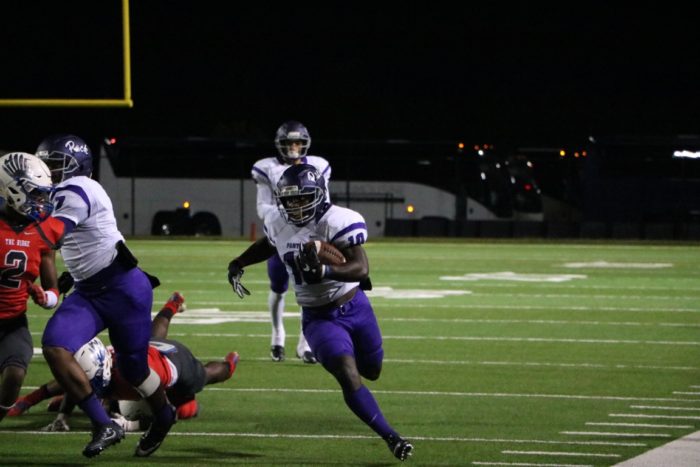 SHENANDOAH -Throughout the first two months of the season, it was an unstoppable offense that carried the Lufkin Panthers. On Friday night, a rejuvenated and hard-hitting defense carried the Panthers to a pivotal District 12-6A win.

Forcing four turnovers and making big play after big play, the Pack defense told the story in a 31-21 win over the Oak Ridge War Eagles at Woodforest Bank Stadium.

“We played excited and we made big plays,” Lufkin head coach Todd Quick said. “Kids that haven’t been making plays were making plays out there. It’s good to see them with smiles on their faces.”

The Panthers’ defense held Oak Ridge to a total of 320 yards a week after allowing over 800 yards against Beaumont West Brook. Lufkin also held Oak Ridge without a first down on four fourth-down attempts and came away with four interceptions.

The defense was at its best when it held Oak Ridge scoreless in the fourth quarter, allowing the Panthers to score 17 unanswered points to come away with the win.

The Panthers needed every bit of that effort on a night in which the War Eagles held Lufkin to a season-low 31 points. Lufkin never really got its footing as it was held to 294 total yards. 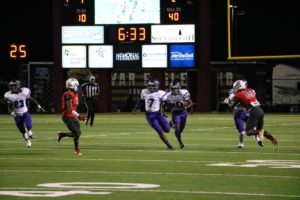 “The offense isn’t going to click every time,” Quick said. “We’ve been clicking for seven weeks now and it didn’t happen tonight.”

While Lufkin’s defense made the plays down the stretch, it was a defensive showcase for the War Eagles in the first half.

After Lufkin drove down the field and scored a touchdown on its first drive of the night, the War Eagles imposed their will on the defensive side, holding the Panthers to a total of 88 yards in the final 22 minutes of the half.

Rodgers was harassed throughout the half with Oak Ridge shutting down the game and rushing him on several pass attempts. He was held to 106 yards and a touchdown on 11-of-22 passing.

Lufkin’s running game, which was missing Kahlil Brown with an injury, was held to 35 yards on 16 attempts.

Oak Ridge’s offense, which had struggled, was able to put up 179 yards and a pair of second-quarter touchdowns.

Reinard Britz did the bulk of the damage for the War Eagles with 124 yards and two touchdowns on 10-of-15 passing.

In the early going, it looked like it may be business as usual for Lufkin’s high-scoring offense. After Dhaillon Phillips had a nice return on the opening kickoff, Lufkin’s offense went to work with Rodgers hitting Malik Jackson on a perfect 25-yard pass for a 7-0 lead just two minutes into the game.

However, that proved to be Lufkin’s only score of the first half.

In the early going, Lufkin’s defense stood tall with Demond McKelvey getting an interception and keeping the War Eagles off the board in the opening quarter.

However, the War Eagles got their offense going in the second quarter with Kyle Townsend catching a six-yard touchdown pass from Reinard Britz to cap a 16-play, 81-yard drive that knotted the game at 7-7.

With Lufkin’s offense stuck in neutral, Oak Ridge took a 14-7 lead on its next drive as Britz hit Darrius Jelks for a 44-yard touchdown on third and 10 with 2:39 left in the half.

Lufkin drove deep into Oak RIdge territory before turning the ball over on downs in the last minute of the half. 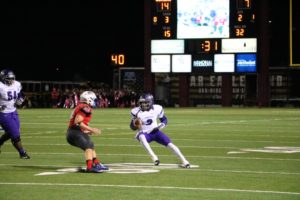 The Panthers got the big play they had been seeking early in the second half. After Lufkin’s defense forced a three and out on Oak Ridge’s first drive, Carl Williams came through with a blocked punt. Oak Ridge eventually fell on the ball at its own 4 yard line.

Lufkin took advantage two plays later as Tre Grant ran in for a three-yard touchdown that knotted the game at 14-14 with 9:53 left in the third quarter.

However, the mistakes continued to pile up for Lufkin as its next three drives ended in a pair of fumbles and a three and out.

Oak Ridge was finally able to take advantage of that field position with Grant Stuard scoring on a 28-yard touchdown run that gave the War Eagles their second lead at 21-14 with 2:23 left in the third quarter.

The Panthers’ defense had a big play of its own to keep them in the game with Jimarion Horace picking off a pass and returning it to the Oak Ridge 40.

Lufkin’s offense took advantage three plays later with Rodgers hitting Phillips for a 23-yard touchdown pass that tied it at 21-21 with 8:43 remaining.

The Panthers’ defense then came up with another stop before the offense put together a methodical drive that eventually culminated in a Rodrigo Molina 27-yard field goal for a 24-21 lead with 2:56 remaining.

The defense the fittingly made one more big play with Jadrian Taylor coming up with a hard hit for a sack on fourth down.

Dhaillon Phillips, one of Lufkin’s key defensive players, then sealed the deal for the Panthers’ offense by scoring on a 21-yard run on the following play to make the final 31-21.

The Panthers’ next action will come on Friday night as it hosts Conroe for Senior Night. The War Eagles (4-5, 2-3) will host Beaumont West Brook in their regular-season finale on Thursday night.