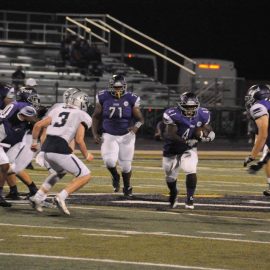 SHENANDOAH – On a rare off night for the Lufkin Panthers’offense, it was the the defense that made sure the College Park Cavaliers still wouldn’t have a chance.

Holding College Park to a total of 105 total yards, the Panthers’ defense stole the show in another dominant performance to lead the way in a 21-3 win in the District 12-6A opener at Woodforest Bank Stadium Friday night.

Lufkin held College Park to a total of nine yards in the second half and the offense did just enough to lead the way to the Pack’s fourth straight win since an opening night loss to Longview.

“(On defense) we played hard, we played fast and we gave good effort,” Lufkin head coach Todd Quick said. “We knocked the fire out of them.”

Lufkin’s offense was held just short of 300 yards on the night with Kewone Thomas throwing for 149 yards and two scores on 11-of-23 passing to go along with a rushing touchdown. Breylon Garcia led Lufkin’s receivers with three receptions for 79 yards and a 63-yard touchdown.

Isaiah Phillps just missed out on another 100-yard night with 95 yards on 15 carries.

“We pulled our weight on defense when the other side wasn’t getting it,” Quick said. “I told the kids I’m happy for the win, but I want more from them. We have to clean everything up.”

Jake Hunnicutt threw for 84 yards on 8-of-20 passing on the night. However, College Park never had a threat of the ground game as it was held to a total of 21 yards on 34 carries.

Aaron Randle ran for 20 yards on nine carries and Travis Washburn had 19 yards on 15 carries.

The Panthers got off to a quick start in the first half before both defenses took over.

Lufkin started the game with some fireworks with Malik Jackson returning the opening kickoff 65 yards to the College Park 1. Lufkin followed with a false start but got on the board two plays later when Kewone Thomas scored on a two-yard QB sneak for a 7-0 lead 53 seconds into the game.

A few minutes later, Jerrin Thompson recovered a fumble to give the Panthers the ball near midfield.

The Panthers converted that into a touchdown when Thomas hit Jackson for a nine-yard touchdown that made it 14-0 with 2:24 left in the first quarter.

However, Lufkin was unable to keep its momentum going on offense throughout the rest of the first half before College Park finally got on the board late.

Following a targeting call that led to the ejection of Lufkin standout Savon Fields, the Cavs got on the board on the final play of the first half when Carson Mohr easily booted a 41-yard field goal through the uprights that narrowed the margin to 14-3.

In the opening half, Lufkin held College Park to a total of 96 yards but was unable to take advantage as it was held to 135 total yards.

Thomas led the Lufkin offense with 65 yards and a touchdown through the air on 8-of-15 passing to go along with a rushing touchdown.

Isaiah Phillips ran for 47 yards on eight carries while Jackson had four receptions for 39 yards and a touchdown.

Jake Hunnicutt threw for 77 yards on 7-of-14 passing with an interception, but College Park only ran for 19 yards on 15 carries.

Lufkin’s shaky offensive play from the first half continued into the third quarter. With Lufkin looking to get some breathing room, it fumbled through the back of the end zone just before he reached the end zone for a touchback.

But after the Panthers’ defense once again stepped up to the challenge, Lufkin finally got the big play it was looking for.

On the first play of Lufkin’s drive, Thomas hit Breylon Garcia in stride for a 63-yard touchdown that upped the margin to 21-3.

That proved to be the final score of the night as neither team threatened in the final quarter.

Lufkin (4-1) will host The Woodlands on Friday night.