Lufkin starts district against winless College Park
The Ambit Energy Game of the week – Lufkin vs. College Park is online! 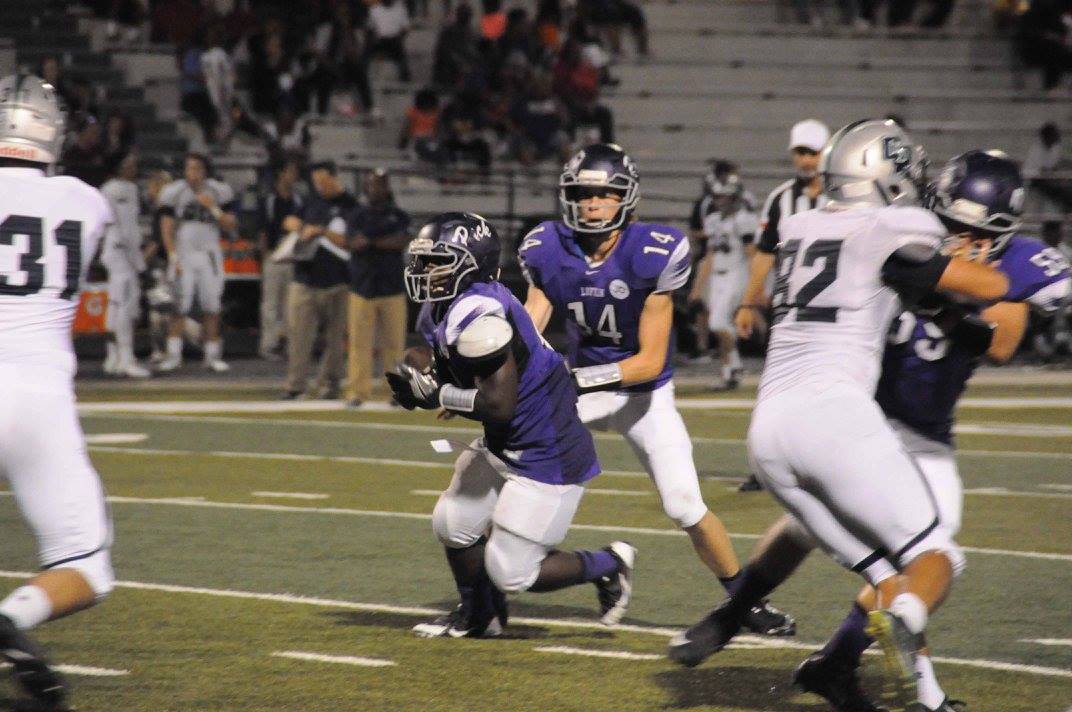 With a challenging non-district schedule in their rearview mirror, the Lufkin Panthers stepped on the gas in the 12-6A opener, piling it on the College Park Cavaliers early and coasting late as they rolled to a 58-17 win at John Outlaw Memorial Field at Abe Martin Stadium on Friday night.
Lufkin scored on each of its first seven possessions and a revitalized defense stood tall once again as the Panthers jumped on an outmanned and winless College Park team from the opening kickoff on their way to their most convincing win of the season.
Kordell Rodgers led the way for the Lufkin offense, throwing for 420 yards and a career-high seven touchdowns on 22-of-26 passing as the Panthers put together their most convincing win of the season.
“We came out of the box good tonight,” Lufkin head coach Todd Quick said. “We got something out of all three phases of the game and we have to be able to do that.”
College Park simply had no answer for the Lufkin playmakers as Malik Jackson had five catches for 167 yards and a pair of touchdowns and Dhailon Phillps had seven receptions for 134 yards and a touchdown.
Khalil Brown added 73 yards and a touchdown on 14 carries and also added a receiving touchdown.
Meanwhile Lufkin’s defense had a second straight strong showing, holding College Park scoreless until the game was out of hand late in the first half.
“They played hard, but there are still things we need to clean up,” Quick said. “We can’t make mistakes against really good teams.”
For the first time this season, the Panthers put this one away early.
Using an impressive aerial attack, the overmatched Cavs had no answer for Lufkin’s offensive weapons.
In the first half alone, Rodgers threw for 363 yards and five touchdowns on 18-of-22 passing. His top target was Jackson, who made five catches for 167 yards and a pair of scores.
In the first 24 minutes, the Panthers outgained College Park 425-168 with the Cavs gaining 71 of those on their only scoring drive of the first half.
Lufkin got the fireworks started early with Jackson catching a pair of long passes from Rodgers to set up a one-yard scoring run from Brown for a 7-0 lead.
The Panthers defense forced a second straight three and out on the following series before Lufkin got its offense going once again. This time, Lufkin needed only three plays with Rodgers connecting with Breylon Garcia for a 12-yard touchdown pass that made it 14-0.
The Panthers started piling it on from there as Jabriar Grimes forced a fumble that was recovered by Jimarion Horace.
Three plays later, Lufkin put up another touchdown with Rodgers hitting Jackson on a nice 48-yard pass for a 21-0 lead.
Lufkin put up one final score before the end of the quarter with Brown catching a pass from Rodgers over the middle and scampering 18 yards for a 28-0 lead.
In the opening quarter, the Panthers outgained College Park 270-57 with Rodgers and Jackson doing the bulk of the damage.
Rodgers finished the quarter with 217 yards and three touchdowns on 10-of-12 passing while Jackson had three catches for 110 yards and a score.
Brown added 53 yards and a touchdown on the ground to go along with his receiving score.
It didn’t get any better for College Park from there as Lufkin continued to dominate on both sides of the ball.
Isaiah Phillips picked off a pass on a tipped ball and Lufkin took advantage with Jackson hauling in a 50-yard touchdown pass from Rodgers that made it 35-0.
The Panthers added their final score of the second quarter when Ellington caught a 25-yard touchdown reception for a 42-0 advantage.
College Park finally got on the board just before the half with Jordan Turnquest scoring on a four-yard run with one second remaining to narrow the gap to 42-7.
Lufkin’s offense stayed sharp on the opening drive of the second half. going 68 yards on five plays with Rodgers hitting Phillips for a nine-yard score that brought the score to 49-7.
From there, Lufkin’s reserves entered the game.
College Park got back on the board on the next drive with Carson Mohr connecting on a 33-yard field goal that made it 49-10 late in the third quarter. The Cavs then scored again on a Turnquest five-yard touchdown run to make it 49-17.
However, Jackson added one more highlight by returning the following kickoff 93 yards for a touchdown that brought the lead back to 39 at 56-17.
The Pack added a safety when a bad snap sailed over the College Park punter and out of the end zone to make it 58-17.
Next up for Lufkin (4-1) will be a trip to The Woodlands on Friday night for a matchup of District 12-6A heavyweights.
Tweet Pin It