Pack takes on Highlanders for Game 2 of district play
Lufkin vs The Woodlands in now online – Watch the Ambit Energy game of the week! 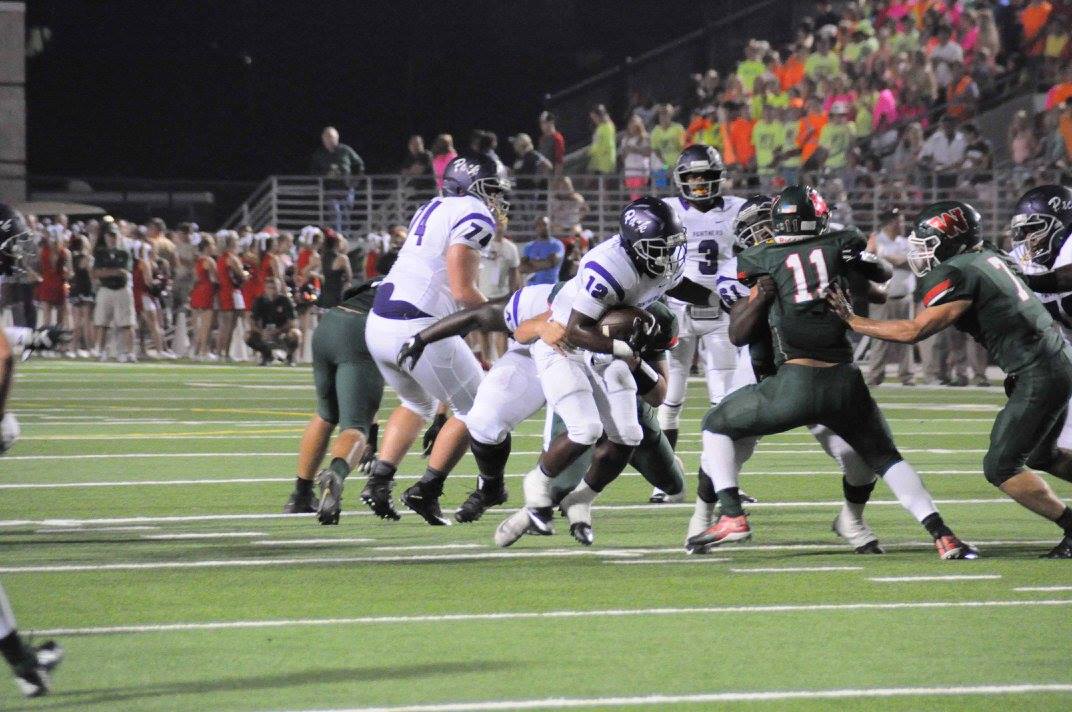 SHENANDOAH – In a matchup of the two District 12-6A heavyweights, it was The Woodlands Highlanders’ offense that delivered the knockout blow to the Lufkin Panthers.
Scoring touchdowns on each of their first nine drives and racking up 610 total yards of offense, the Highlanders imposed their will on the Panthers, rolling to a 63-42 win at Woodforest Bank Stadium.
“We have to get better,” Lufkin head coach Todd Quick said. “We have to get well, get everybody back on the field.”
The Woodlands’ Eric Schmid threw for 272 yards and six touchdowns on 15-of-16 passing and ran for 78 yards on nine carries as the Highlanders’ offense had their way with the Lufkin defense.
Jordan Talford ran for 127 yards and two scores on 13 carries.
Dylan Casey caught six passes for 141 yards and two scores and Kesean Carter made four receptions for 95 yards and a touchdown.
That was enough to overshadow a Lufkin offense that put up 42 points against a Highlanders’ defense that had allowed a total of 44 points in the first four games.
Kordell Rodgers continued his spectacular season with 387 yards and five touchdowns on 30-of-47 passing.
Malik Jackson was his top target with eight catches for 166 yards and a pair of scores.
The opening half was an offensive showcase with the Highlanders running over and around a beleaguered Lufkin defense.
The Highlanders scored on each of their five first-half possessions, totaling 365 yards on 38 plays.
Eric Schmid was nearly flawless, completing 13-of-14 passes for 208 yards and four touchdowns. In addition, he ran for 55 yards on six carries.
His top target was Dylan Casey, who caught five passes for 97 yards and a touchdown  before the break. Kesean Carter had three catches for 67 yards and a score.
Lufkin’s offense held its own against a defense that came in as one of the state’s best, scoring on three consecutive drives after going three and out on its first series.
Rodgers caused problems for The Woodlands’ defense by using his legs to keep several drives alive. He finished the half with 191 yards and two touchdowns on 15-of-22 passing. Malik Jackson had four catches for 102 yards and two touchdowns.
The Woodlands took the opening kickoff and set the tone for the first half as it drove 72 yards on 10 plays with Chris Stewart catching an 18-yard touchdown pass from Schmid.
Following a Lufkin three and out, Schmid hit a wide-open Dylan Casey for a 51-yard touchdown and a 14-0 lead.
The Panthers’ offense found its footing on the following drive. Facing a fourth and 10, Rodgers hit an open Jackson for a 45-yard touchdwon that narrowed the gap to 14-7.
However, Lufkin’s defense continued to struggle with The Woodlands driving 75 yards on 11 plays with Jordan Talford scoring on a one-yard run to make it 21-7.
Lufkin answered back with Rodgers eluding the Highlanders’ rush then lofting a deep pass to Jackson, who outjumped a Highlanders’ defender for a 35-yard pass that narrowed the gap to seven for the second time at 21-14 with 7:53 left in the half.
The Woodlands was undeterred with Carter hauling in a deep pass, making a Lufkin defender miss and running the rest of the way for a 51-yard score that pushed the lead back to 14 at 28-14.
The Panthers kept up the pressure on the following drive, going 80 yards on 12 plays with Kahlil Brown scoring on a one-yard run that made it 28-21.
The Woodlands scored one more time before the half as Schmid faked to Talford then found a wide open Grant Murphy for a one-yard score that gave the Highlanders a 35-21 lead at the half.
The Woodlands continued its momentum in the second half by forcing a Lufkin punt on the opening drive then picking up where it left off on the offensive side of the ball as Talford had a 59-yard run to set up his own three-yard score for a 42-21 lead.
Lufkin’s offense cut it back to two scores with Jamel Richemond taking a swing pass from Rodgers and running in for a seven-yard score that made it 42-28. The score was set up by a spectacular 44-yard catch from Jackson.
The Woodlands had an immediate answer with Carlos Ramos scoring on a 20-yard run two plays later to make it 49-28.
Things got even worse for the Panthers when they failed to convert on a fourth-down conversion and The Woodlands took advantage with a 20-yard touchdown pass from Schmid to Connor
Klapesky, making the score 56-28 with 3:51 still left in the third quarter.
The Panthers stalled that momentum with a 16-play, 82-yard drive that was capped by a nice 23-yard touchdown pass from Rodgers to Breylon Garcia that cut the deficit to 56-35 in the opening minute of the fourth quarter.
The Woodlands had an immediate answer with Schmid hitting Casey for a 44-yard touchdown that made it 63-35 less than a minute later.
Lufkin’s offense continued to put up some big numbers on the following drive with Rodgers hitting Ja’Tavion Tutt for a 19-yard score, making it 63-42 with 7:31 left in the game.
The Woodlands then ran out most of the clock to preserve the win, its fifth straight to start the season.
Tweet Pin It