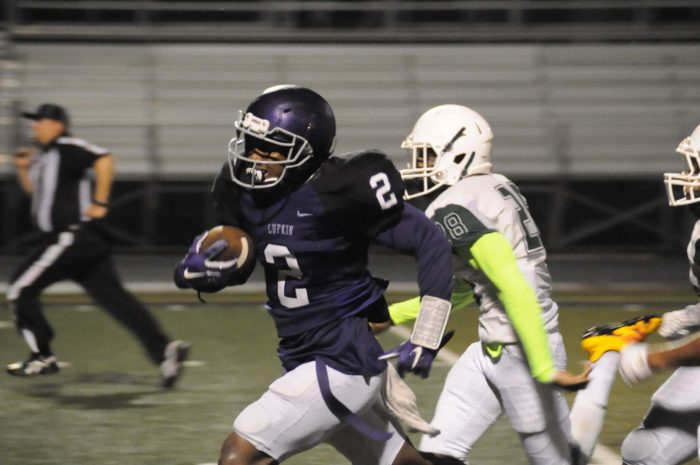 A slow start didn’t deter the Lufkin Panthers from a strong finish as they dominated the latter stages of a scrimmage against the Huntsville Hornets at John Outlaw Memorial Field at Abe Martin Stadium on Friday night.

Lufkin scored on its final two drives of the controlled scrimmage portion before outscoring Huntsville 21-0 in a live quarter of action in their final tune-up before the season opener against Longview on Aug. 26.

“Once we got going, we were pretty strong,” Lufkin head coach Todd Quick said, “but you can’t come out in a game and play like we did at the start. That’s why you scrimmage. You would rather that happen now than in a game.”
Lufkin’s first-team defense kept Huntsville out of the end zone during both the controlled and live action portions of the scrimmage.

Huntsville was able to score three times against the Pack’s second-team defense, while Lufkin’s first team scored a pair of touchdowns and the second team scored one.

The Panthers had their struggles through much of the action before dominating in the final stages.

“I think they finally got tired of getting punched in the mouth,” Quick said. “I’m not sure what it was. The effort was there, but the execution wasn’t.”

The Panthers got plenty of contributions from their playmakers on offense with Kordell Rodgers leading the way.

In the late stages of the controlled scrimmage, he broke free for a 49-yard touchdown run. He then found Breylon Garcia for a 68-yard touchdown pass just a few plays later.

Kahlil Brown showed his versatility throughout the scrimmage and eventually scored on a 38-yard touchdown run, carrying a defender the final five yards, for a touchdown on the opening drive of a quarter of live action.

Following a three-and-out, Malik Jackson took a short shovel pass from Kordell Rodgers and sprinted 54 yards for a touchdown and a 14-0 lead.

Jackson’s second touchdown catch, this one from 23 yards out, gave the Panthers a 21-0 lead.

“We’re going to need plays like that from those guys,” Quick said. “We still have plenty to work on though. We had some mistakes up front, which we knew we were going to have. You can’t put the ball on the ground as much as we did. Those are things that can be fixed though. The effort was there.”

The Panthers’ defense looked ahead of schedule against a Huntsville first-team unit that had a hard time getting anything going.

Savon Fields had a huge hit near the end of the scrimmage. Other players that made key plays were Torrand Grisby, Isaiah Phillips, Desmond McKelvey, Za’Courtney Deason and Jimarion Horace.

“We were good at times there,” Quick said, “but they gave us a few problems with their tempo. Teams are going to try to speed it up against us, and we have to be ready for that.”

Some of the other highlights from the scrimmage included some strong play by backup QB Dillon McDuffie, who kept the offense moving when he was on the field.

With two weeks of practice and a scrimmage in the books, Lufkin will now set its sights on Longview, which will come to town after sweeping two games against the Panthers last year.

“We’ll get to work on Longview at 9 in the morning,” Quick said. “The kids will be ready.”