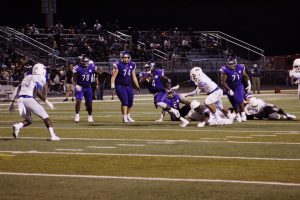 A season-opening loss to the Longview Lobos showed a young Lufkin Panthers team how much work they had ahead of them. With the state-ranked John Tyler Lions in town two weeks later, the Panthers showed just how dangerous they truly can be.

Malik Jackson had four rushes for 80 yards, including a 60-yard touchdown, to go along with two catches for 45 yards and two scores and Isaiah Phillips ran for 123 yards, including the game-sealing 57-yarder as the Panthers built a 23-point lead and held off a late John Tyler surge on the way to a thrilling 44-34 win at John Outlaw Memorial Field at Abe Martin Stadium on Friday night.

With the win, Lufkin was able to get a little bit of payback from a season-ending 50-49 loss to John Tyler last season.

“We don’t have to talk about those losses anymore,” Lufkin head coach Todd Quick said. “Hopefully we can start our own streak now.

Lufkin was able get the win on a night in which it never trailed. The Panthers held a 14-0 lead in the first quarter. Then after John Tyler had erased that lead before half, the Panthers scored the next 23 points for a 37-14 lead.

John Tyler did not go down without a fight as it cut that margin to three points in the final quarter before Phillips finally delivered the knockout blow in the final minutes.

“We let them back in the game and you can’t do that against a good team,” Quick said. “We were able to fight through that. We didn’t make it easy. The kids put themselves in a bind and we put them in a bind, but they fought through it.”

Lufkin was able to fight through it thanks in part to a defense that gave up some big plays but never let John Tyler gain the lead.

However, Quick was pleased with the overall effort.

“We had five and six guys running to the ball to make plays,” Quick said. “We can’t give up the big plays that we did, but we were able to fight through it.”

The first half was a tale of two quarters with the Panthers dominating the opening frame before Longview took over through most of the second quarter. Lufkin added a final touchdown just before the break.

After John Tyler won the coin toss and deferred to the second half, Lufkin’s offense didnt waste any time in going to work.

The Panthers capped off an opening 11-play, 81-yard drive with a Thomas one-yard touchdown run on a quarterback sneak for the early 7-0 lead. On the drive, Lufkin completed only one of two passes for a total of negative-four yards while running for 77 yards on nine attempts.

After a Lufkin stop, the offense found even more success on the second drive, this time doing much of the damage in the air. Ja’Lynn Polk got the offense going with a 31-yard catch, and two plays later, Thomas hit a wide-open Jackson over the middle for a 28-yard touchdown that made it 14-0 with 2:54 left in the first quarter.

Lufkin was finally stopped on a third and short on its following drive, a stop John Tyler used to put momentum in its favor.

John Tyler finally found some breathing room when Devlen Woods hit a wide-open Victor Campbell Jr. over the middle for a 32-yard pass. A few plays later, that exact play and combination worked for a 15-yard touchdown that put the Lions on the board, narrowing the margin to 14-7.

The Lions’ offense got going again later in the quarter when Roderick Hawkins made a nice cut in the backfield then sprinted to the left corner of the end zone for an 18-yard touchdown run that knotted the game in the final minute of the half.

However, just like Lufkin had done against Nacogdoches a week earlier, the offense took advantage of the final minute to take some momentum into the locker room.

John Tyler helped Lufkin with back-to-back 15-yard penalties to start the drive before Polk made a 21-yard catch.

Two plays later, Thomas threw into double coverage in the end zone. However, when the ball was tipped, Jackson was able to make a nice catch over both defenders for a 17-yard touchdown with 20 seconds left in the second quarter.

The extra point was missed to the left, but Lufkin still held a 20-14 lead at halftime.

In the opening half, Thomas threw for 93 yards and a pair of touchdowns and ran for 66 yards and another score to pace Lufkin’s offense. Jackson had two catches with both of those going for touchdowns.

Hawkins had 56 yards and a touchdown on just five carries for John Tyler, and Campbell had a pair of catches for 47 yards and a score.
Lufkin was able to push that lead to a two-score game early in the second half when the Lufkin defense came up with a stop and Jackson followed with a 41-yard punt return.

The Panthers eventually settled for a 30-yard Rodrigo Molina field goal that made the score 23-14 in the opening minutes of the second half.

Lufkin’s special teams then got in on the act, forcing a fumble that Foster recovered deep in John Tyler territory.

On the next play, Thomas went untouched for an eight-yard score that made it 30-14 with 6:50 left in the third quarter.

Following another Lufkin stop, it was Thomas doing the damage once again as he lined up in the backfield and easily sprinted away from the John Tyler defense for a 60-yard touchdown run that made it 37-14 with 2:55 left in the third quarter.

The Lions were able to slow down that momentum on the following drive when Woods hit Kitan Crawford for a 55-yard pass that set up a four-yard touchdown run from Hawkins, narrowing the gap to 37-21 with 1:59 left in the third quarter.

The Lions pulled closer early in the fourth quarter when Woods hit Keandre Street for a nice 26-yard touchdown pass that made it 37-27. However, Lufkin was able to stop the two-point conversion to keep it at a two-score game with 9:54 remaining.

With Lufkin driving on the following possession, Michael Givens-Washington stepped in front of a Thomas pass and returned it to midfield to give John Tyler the ball back.

Givens-Washington then capped the following drive with a 14-yard touchdown reception on third down that narrowed the margin to 37-34 with 6:12 still left in the game.
Lufkin finally let its fans exhale on the following drive when Phillips took a handoff and went right up the middle for a 57-yard touchdown that made it 44-34 with 4:05 left in the game.

John Tyler drove the ball to the Lufkin 4 in the final minute of the game but turned the ball over on downs as Lufkin was able to finally celebrate the win.
Lufkin (2-1) returns to action on Friday night as it hosts Monterrey Tech. John Tyler will open district action on Friday when it travels to play Rockwall.