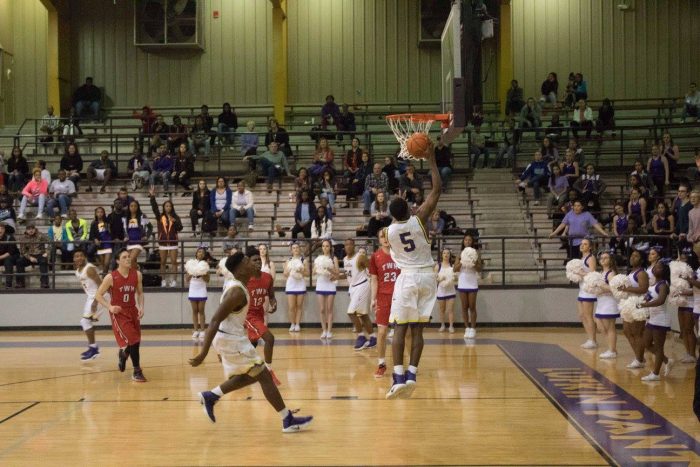 In their return to the state’s largest classification, the Lufkin Panthers’ basketball team showed they wouldn’t back down to any challenge.

From clinching a playoff spot with a win over district champion The Woodlands in the regular-season finale to giving third-ranked Dallas Skyline all it could handle in the playoffs, Lufkin maximized the potential of a team that was short on returning experience.

Four of those players were honored as the 12-6A All-District Team was recently announced.

Panthers’ sophomore KeVonte Hurts earned the district’s Newcomer of the Year honors in helping Lufkin to a tie for second place in 12-6A.

He had company from a trio of Lufkin seniors who were named to either the first or second-team squads.

Courtnee Garcia, the team’s leading offensive threat, was named to the first-team squad.

He was joined by perimeter teammate Kordell Rodgers, who was also a first-team selection. The award came after Rodgers won the district’s Offensive Player of the Year on the football field.

Lufkin’s Nick Wilson rounded out the honors on the court for the Panthers as he was named to the second team.

Lufkin also had a pair of honors for its work in the classroom as Garcia and Hurts were named to the Academic All-District Team.

In order to make that team, players are required to earn a GPA of 90 or above.

College Park’s Quentin Grimes, one of the top-rated juniors in the nation, was honored as the 12-6A MVP while district champion The Woodlands earned the other two superlative honors.

Sonny Williams was named the Defensive Player of the Year and Dale Reed earned Coach of the Year.