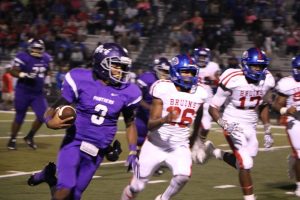 BEAUMONT – When the Beaumont West Brook Bruins left Lufkin a season ago, the Panthers’ defense was left in shambles, allowing 70 points in a seven-point shootout loss. Given a second chance, Lufkin left a lasting impression on those same Bruins.

Holding the Bruins scoreless until no time remained on the clock, Lufkin’s defense stymied one of the more dangerous offenses in the district to the tune of 135 yards on their way to a convincing 50-7 win in Beaumont.

More than half of those West Brook yards came in the final minute after Lufkin took a knee near the West Brook goal line to avoid going up 57-0, and the Bruins didn’t get on the board until all zeroes showed on the clock.

Meanwhile Lufkin’s offense was up to the task as well on a night it could have easily matched the 63 points it put up against West Brook one season ago.

Isaiah Phillips led the way with 135 yards and two touchdowns on 13 carries and Tre Grant had 56 yards and a touchdown on 12 carries.

Kewone Thomas added two passing touchdowns and ran in for another score.

In a thorough domination of the Bruins in the opening half, Lufkin’s defense stole the show, holding them to 73 total yards, including minus-25 on the ground while forcing three turnovers.

That allowed the Panthers to pick up a 30-0 lead despite gaining only 140 total yards of offense.

Lufkin got on the board first when it went for it on fourth and two with Isaiah Phillips running untouched for a 34-yard touchdown that made the score 7-0.

The Panthers’ defense got on the board for the first time when a West Brook snap got past the quarterback and sailed through the back of the end zone, making it 9-0 in the first minutes of the second quarter.

That lead went to 16-0 when Kewone Thomas hit Breylon Garcia for a seven-yard touchdown pass with 7:13 left in the opening half.

Lufkin’s defense forced the second of its two turnovers on the following drive as it recovered a fumble at the West Brook 21.

The Pack took advantage with Malik Jackson making a nice 16-yard touchdown reception from Thomas that made the score 23-0 with 4:23 left in the half.

Just 23 seconds later, Jerrin Thomas made a nice play to step in front of a West Brook receiver before racing down the sideline for a 25-yard interception return that made it a 30-0 game.

In the first half, Phillips ran for 67 yards and a touchdown on 10 carries.

Thomas threw for a pair of touchdowns while also running for 40 yards.

The Pack kept the momentum going in the second half as it took the kickoff and scored four plays later when Phillips scored on a 45-yard run that made it 37-0 with 10:37 still left in the third quarter.

Thomas made the score 43-0 when he snuck in a one-yard run with 4:02 left in the third quarter.

Lufkin put together its most time-consuming drive of the night with Tre Grant finishing it off with a one-yard touchdown run that made the score 50-0 with 9:03 left in the third quarter.

West Brook finally got on the board after the clock had hit all zeroes. Thanks to a Lufkin facemask penalty on the last play of regulation, the Bruins were rewarded with an untimed down and they took advantage with Marcus Johnson hitting Bralin Simon for an eight-yard touchdown that made the final 50-7.

Lufkin will return to action on Friday night when it hosts Oak Ridge for homecoming at 7:30 p.m