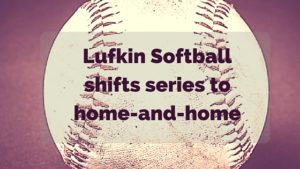 The Lufkin Lady Panthers’ softball team has adjusted their schedule for their Class 5A Region II Quarterfinal matchup with the Hallsville Ladycats.

The series was originally scheduled to be played at Brook Hill but has now been moved to a home-and-home best-of-three matchup.

A third game, if necessary, would be played on Saturday afternoon at 2, also at Hallsville High School.

The series is one of the premier ones in the state as it features two of the state’s top four teams, according to the Texas Girls Coaches Association poll.