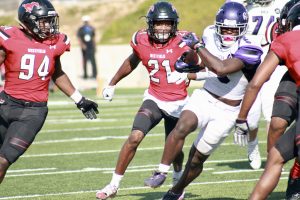 NEW CANEY – Coming into their Class 6A Division II Region II playoff game with an unbeaten record, the Spring Westfield Mustangs were pegged as state title contenders. On Saturday afternoon, the Lufkin Panthers showed why they are serious threats to bring home a title of their own.

Playing in front of a pro-Lufkin crowd, the Panthers dominated the first 43 minutes against a Westfield team that had dominated the last two months of their schedule. However, that was just a warmup for a final five minutes in which the momentum changed on seemingly every play.

When the dust had finally settled, the Panthers emerged with a memorable 14-11 win over Westfield, advancing to the state quarterfinals for the first time since 2005.

“We’re four deep now,” Lufkin head coach Todd Quick said. “I’m really proud of the kids. We took them out of their rhythm and they had a hard time getting anything going.”

With the win, Lufkin advances to the state quarterfinals where it will resume its longtime rivalry with the Longview Lobos, 30-24 winners over an also previously undefeated Klein Collins team. That game will be played on the SFA campus in Nacogdoches on Saturday afternoon at 2 p.m.

If Saturday’s finish is any indication, fans should buckle their seatbelts.

After Lufkin’s defense stole the show for most of the day, the Panthers appeared poised to coast their way into the state quarterfinals.

Spring Westfield showed why it wasn’t going down without a fight. With the Panthers attempting to run out the clock with the ball near midfield and five minutes remaining, Dorien Hawkins came up with the key play for Spring Westfield, intercepting a pass and returning it 45 yards to the Lufkin 19.

That opened the door for a Westfield offense that was never able to move the ball against Lufkin as Edwin Allen scored on a one-yard run three plays later.

TerranceGipson then hit Noah Massey with the two-point conversion, narrowing the gap to 14-11 with 4:01 left in the game.

That proved to be just the start of a flurry of action.

Lufkin used a running game that was consistent throughout the day to set up a third and inches play. However, a snap sailed past Lufkin QB Kewone Thomas. The Panthers recovered but were forced to punt.

That punt then deflected off a Westfield returner who ran into a Lufkin player on the play with the Panthers recovering the ball. The action originally drew a flag but it was waved off, allowing the Panthers to take over near midfield.

However, Westfield came up with a stop with less than one minute remaining, forcing Lufkin into another punt. This time, the ball sailed well over punter Max Quick’s head and into Lufkin territory. Alertly, Quick chased the ball down and got a punt off in front of the Westfield defenders, pinning the Mustangs at the 19.

“That was a pretty headsy play,” Todd Quick said of his son.

Fittingly, it was the Lufkin defense that closed the door on the game. After Westfield got a first down, Lufkin’s March Thomas broke loose for a sack, letting the clock move down to eight seconds.

Westfield completed a pass on the following play but a lateral fell harmlessly to the ground, allowing the remaining seconds to run off the clock and set off a wild celebration from the pro-Lufkin crowd.

That wild flurry capped off a game in which Lufkin seemed to dominate much more than the scoreboard indicated.

Westfield’s defense got much of the attention coming into the game, but it was the Panthers that were up to the challenge.

The Panthers held the Mustangs to a total of 199 total yards, including just 60 on the ground on 24 carries.

Gipson completed 10-of-14 passes for 139 yards while Massey had four catches on 69 yards.

“Our defense came ready from the first play,” Quick said. “We rotated guys in and out to keep them fresh and they held up and made the big plays.”

Meanwhile, the offense was able to control the game most of the day thanks to the powerful running of Isaiah Phillips and Kewone Thomas behind a grinding offensive line.

Phillips finished the game with 159 yards and a touchdown on 33 carries while Thomas had 39 yards on 16 carries.

“Nobody thought we could do that except the kids on the offensive line and the quarterback and running back,” Quick said. “We went against the ones all week, and the kids said the reads were easier today than they were during the week.”

The opening half was a defensive battle that featured a total of 312 yards, two turnovers and only 10 points.

Lufkin’s offense got the opening kickoff and drove 50 yards on 14 plays before turning the ball over on downs.

The Panthers’ defense had the answer with Jerrin Thompson intercepting a pass on Westfield’s first offensive play of the game. That eventually led to a missed 42-yard field goal before Lufkin’s defense forced a punt near midfield that set up the Panthers’ lone score of the first half.

Driving 80 yards on 10 plays in yet another time-consuming drive, Lufkin punched in the first points of the day when Kewone Thomas hit Ja’Lynn Polk for a seven-yard touchdown and a 7-0 lead.

Following a Westfield three and out, Lufkin appeared to be on the verge of gaining some breathing room before Westfield’s Marcus Moore came up with an interception in the end zone.

That seemed to serve as a wakeup call for a Westfield offense that had been held to 43 yards, an interception and a single first down on its first three drives of the game.

Westfield then put together an 11-play, 73-yard drive that went inside the Lufkin 10 before an illegal block proved to be costly. The Mustangs eventually settled for a 25- yard field goal from Brandon Amaya with nine seconds left in the half that trimmed the margin to 7-3 at the half.

In the first half, Lufkin’s defense stood tall against a potent Westfield offense, holding the Mustangs to a total of 125 total yards.

Terrance Gipson completed 5-of-7 passes for 87 yards while Noah Massey had a pair of catches for 45 yards.

Lufkin was able to control much of the half thanks to a ground game led by Isaiah Phillips, who ran for 93 yards on 16 carries. Kewone Thomas completed 5-of-11 passes for 34 yards and a touchdown and also ran for 43 yards on six carries.

Ja’Lynn Polk led Lufkin’s receivers with three catches for 25 yards and a touchdown.

In the second half, Lufkin kept the momentum going in its favor as it forced a punt on Westfield’s opening drive.

Lufkin’s offense then did its part of a drive that spanned 82 yards on 13 plays while taking 5:10 off the clock.

Polk came up with a key 35-yard catch that helped set up Phillips’ two-yard touchdown run, making the score 14-3 with 3:39 left in the third quarter.

That appeared to be more than enough before the Panthers hung on late for the win.

Lufkin improves to 11-2 with the win while Westfield closes the season with an 11-1 record.