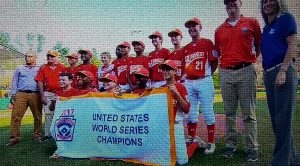 A summer to remember just became one for the ages for “The Thundering 13.” Facing a five-run deficit against a team that had allowed a total of one hit in the first three games of the Little League World Series, most teams might have been happy to settle for second place.

In the U.S. Championship Game, the Lufkin All-Stars proved they aren’t most teams and they didn’t fly to Williamsport, Penn., to settle for second place.

Mark Requena hit an opposite-field two-run homer in the sixth inning and Chip Buchanan shut the door on a talented group from Greenville N.C., as Lufkin captured the U.S. championship in grand fashion, rallying for a 6-5 win.

“They worked their butts off all year,” Lufkin manager Bud Maddux said in an ABC interview following the game. “That’s what they worked them off for.”

For most of the afternoon, it looked like it wouldn’t be Lufkin’s day. A North Carolina team that won a 2-1 game against Lufkin three days earlier stormed out to a 5-0 lead and looked to be well on its way to the national title.

However, Lufkin flashed the resiliency it has shown all summer long, chipping away for two runs in the fourth and two more in the fifth.

That left Lufkin trailing by a single run entering its last at bat. Collin Ross, who worked his way through 4 2/3 innings on the mound, was hit by a breaking ball in the helmet to start the inning.

Requena, who also pitched Lufkin into the championship game on Thursday night, took a breaking ball that was below his knees and roped it over the left field wall for an opposite field home run that sent the Lufkin faithful into a frenzy.

However, the job wasn’t done yet. Buchanan, who got the last out in the fifth inning on a strikeout, needed to get the final three outs to preserve the victory against a North Carolina team that hadn’t lost all summer.

He induced a grounder to third baseman Requena for the first out then struck out the following hitter. North Carolina then hit a grounder to slick-fielding shortstop Blake Slaga, who perfectly made yet another play, sealing the win for the local youngsters who have captivated the town and many parts of the state.

Buchanan picked up the win in relief, getting the final four outs in order, including two strikeouts. He got those outs in fewer than 20 pitches, meaning he can start the World Championship Game on Sunday afternoon. That game will be televised on ABC at 2 p.m.

While Buchanan got the win, Lufkin had a chance thanks to Ross, who was hit to the tune of five runs in the first three innings. He maintained his composure and got Lufkin into the fifth inning, giving the potent bats a chance for the comeback. He finished the game allowing eight hits while striking out six and walking none.

Requena led Lufkin at the plate with a pair of singles to go along with his two-run homer. After his fourth-inning single, he had the only three hits North Carolina had allowed in 21 innings. A few pitches later, Clayton Wigley got the fourth one, a two-run shot that sailed over the center field fence and brought life into the Lufkin dugout.

Lufkin put together the first good scoring opportunity of the game in the second inning when Ross was hit by a pitch and Requena singled to left.

The runners advanced to second and third on a wild pitch with one out. However, North Carolina’s Carson Hardee struck out the next two batters to preserve the shutout. Hardee would eventually work the first 4 2/3 innings before leaving due to the tournament’s pitch limit. Chase Anderson later took the loss.

In the bottom half of the inning, Hardee got some backup from his offense as Cameron Greenway and Joe Joe Byrne started the inning with back-to-back singles. Collin Ross then got a grounder back to the mound and tried to get Greenway out at third. However, he dove safely back into the bag, loading the bases with no outs.

Bryce Jackson followed with a two-run single to left, putting North Carolina on the board. Lufkin was able to get an out at second on the play and a groundout and strikeout got Ross out of the inning without further damage, leaving the score at 2-0.

North Carolina added three runs to its total in the third inning. Thomas Barrett and Ashton Byars started the inning with back-to-back singles and Byrne followed with a two-run single that made it 4-0.

Will Casey brought North Carolina’s fifth run in to score with a groundout to second.

Lufkin finally got to North Carolina for a pair of runs in the fourth inning as Requena got his third hit in as many tries against North Carolina pitching with a center to center. His chance at what looked like a sure double was taken away when he tripped rounding first base.

Clayton Wigley made sure that didn’t matter as he hammered his second homer of the Little League World Series over the center field wall, narrowing the gap to 5-2.

The comeback effort didn’t stop there as Lufkin’s bats went back to work in the fifth inning.

Pinch hitter Charlie Deaton roped a leadoff single to left and Blake Slaga came in as a pinch runner.

He moved to second and third on wild pitches before Malcolm Deason delivered a clutch RBI single to center, making the score 5-3.

Deason then used his wheels to his advantage taking second on a wild pitch. He took off for third on another wild pitch and came around to score when the catcher’s throw sailed into the outfield, making the score 5-4.

The Panthers then completed the comeback in the top of the sixth.

Ross started the rally as he was hit in the helmet by a breaking ball. Requena followed by golfing an opposite field homer that just cleared the left field wall, giving Lufkin its first lead over North Carolina in two games at 6-5.

Lufkin will now take on an undefeated Japanese team for the World Championship on Sunday at 2 p.m. on ABC. North Carolina will play Mexico for third place at 9 a.m.