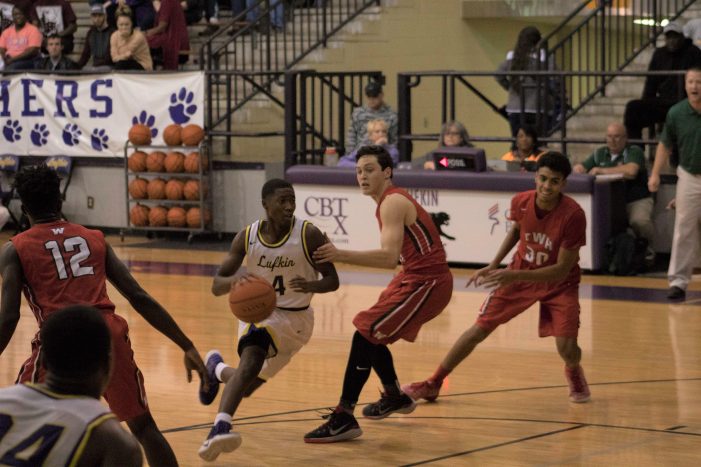 After going head-to-head with the state’s No. 3 team for nearly a full 32 minutes, the Lufkin Panthers found themselves moments away from pulling off one of the biggest upsets in the state at any level.

Unfortunately for the Panthers, Kansas signee Marcus Garrett was on the other side of the court. Making a spin move before finishing off a nice basket, one of the top players in the nation put in the game-winner with two seconds to lift the Skyline Raiders to a heart-stopping 44-42 victory over the Panthers in Class 6A Region II Quarterfinal action at Lindale High School Wednesday night.

The basket capped off a signature performance in which he scored a game-high 27 points. He almost single handedly lifted his Skyline team to a win over the Panthers on a night they showed the determination that has defined the team throughout the season.

He scored 14 of his team’s 18 points after the break despite a determined defensive effort from the Panthers.

“There’s a lot of raw emotion right now,” Lufkin head coach J.T. McManus said. “We had a chance to win at the end and that’s what we wanted.”

With the win, Skyline improved to 32-1 on the season while punching a ticket to this weekend’s regional tournament. This time Lufkin made sure nothing would come easy for a Skyline team that had won its first two playoff games by 25 and 23 points respectively.

It was also the first time Skyline won by single digits since Jan. 14, a span of 11 games.

Courtnee Garcia did his part in making big play after big play on his way to a 17-point night. KeVonte Hurts played big on both sides of the court in finishing with 10 points.

Lufkin proved from the opening tip that it wasn’t going to be intimidated by one of the top-rated teams both in the state and the nation. Hurts gave Lufkin a 2-0 lead with an early layup and Garcia knocked down a three for a 5-3 lead.

That proved to be the final lead of the night for the Panthers on a night they never trailed by more than eight points.

After Skyline scored the next six points, Lufkin chipped away at the lead, knotting the score at 15-15 on a Garcia trey.

Skyline’s Kantrell Burney closed the quarter with a three-point play that gave the Raiders an 18-15 lead.

The Panthers pulled within a single point on a Breylon Garcia layup to start the second quarter but only managed one more field goal in the rest of the quarter.

Skyline elected to go to a stall to kill off the final 2:20 of the second quarter before Garrett was fouled and hit one-of-two free throws to take a 26-21 lead into the half.

That lead grew to eight points on a Garrett three in the opening minute of the second half.

Lufkin had the answer with Hurts knocking down a three and Courtnee Garcia making two free throws to narrow the gap to 29-26.

After Skyline built that lead back to seven points, Garcia and Chris Thompson hit back-to-back baskets to narrow the margin to 35-32 headed into the fourth quarter.

Lufkin pulled even for the first time since late in the first quarter when Hurts converted a three-point play, making it 35-35.

That set the tone for a frenetic fourth quarter with Garrett hitting a three and two free throws, pushing the margin back to 40-35.

Lufkin’s Hurts and Skyline’s Garrett exchanged baskets to make it 42-37.

The Panthers then moved to the verge of an upset when Garcia knocked down a three and Calvin scored on a layup, making the score 42-42.

Skyline had the final highlight of the night when Garrett made his bucket with two seconds left.

Lufkin had one final chance at a desperation try to win it but an inbounds throw was off the mark, leaving Skyline with the win.

Other scorers for Lufkin were Breylon Garcia and Calvin (4), James Jefferson (3) and Jeremiah Davis and Thompson (2).

Lufkin finished its season with a 23-13 record.