District 12-6A teams ready for playoffs
No Sideliners Meeting Tonight 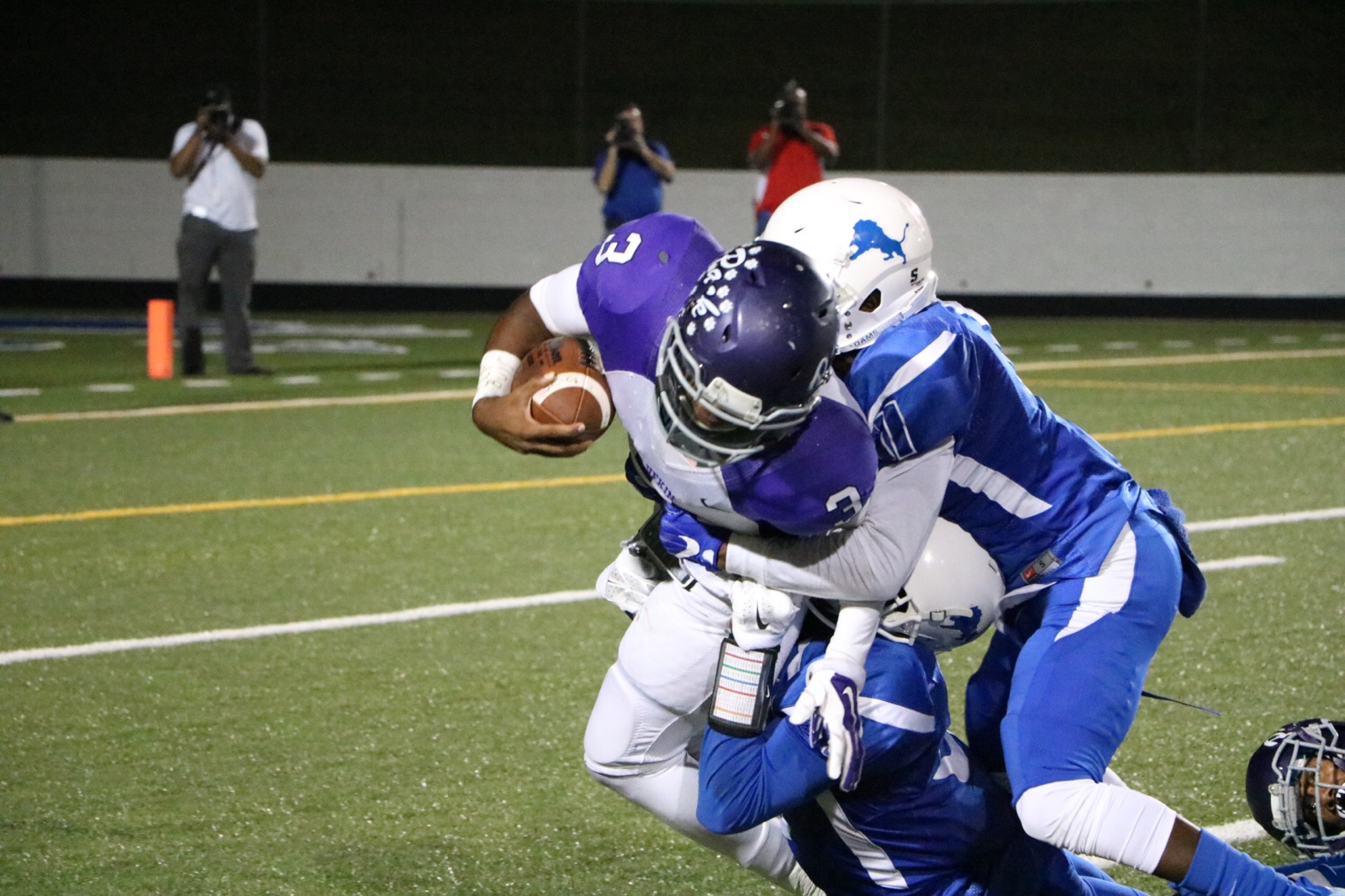 TYLER – After taking the best shot from Bryson Smith and a talented John Tyler Lions’ squad, a resilient Lufkin Panthers’ squad found themselves one play away from stealing one for the ages in a Class 6A Region II Bi-District matchup at Trinity Mother Frances’ Rose Stadium on Friday night.

Unfortunately for the Panthers, John Tyler’s Jontavius Mosley was the one to make that play. With Lufkin needing a two-point conversion with 1:21 remaining after a Kordell Rodgers 13-yard touchdown run narrowed the gap to a single point, Mosley was there to defend a potential game-winning pass as the Panthers suffered a heartbreaking 50-49 loss.

“You make a choice there,” Lufkin head coach Todd Quick said. “You sit back and try not to get beat or you go out there and try to win the game. That’s what we chose to do.”

Lufkin was almost able to erase a 15-point deficit in the game’s final nine minutes, 21 points in a seven-minute span.

The Panthers tied the game at 43-43 on a Rodgers two-yard run and a two-point conversion from Javante Ellington with 6:22 left before John Tyler regained the lead on a 37-yard pass from Smith to Michael Givens-Washington.

Rodgers’ run narrowed the gap to one before John Tyler came up with the stop on the two-point conversion then made one final first down to put the game away.

“The kids made plays for us all night,” Quick said. “We’re in this together. They take pride in this.”

John Tyler was able to sneak away with the win thanks to a huge night from Houston commit Smith, who completed 25-of-35 passes for 380 yards and three touchdowns and also ran for 190 yards and three scores.

That proved to be just enough to stave off a determined group of Panthers.

Kordell Rodgers completed 21-of-37 passes for 223 yards and two touchdowns and ran for 69 yards and three touchdowns.

Kahlil Brown battled through injuries to run for 150 yards and a touchdown on 31 carries.

Malik Jackson had a big night with eight receptions for 108 yards and a touchdown. He also returned a kickoff 100 yards for a touchdown.

With two old faces renewing acquaintances, it was a back-and-forth first half in which team held an eight-point advantage before John Tyler eventually took a 22-21 lead into the break after an exciting 24 minutes.

The Panthers took the opening kick and used a methodical attack to strike first. Going 78 yards on 13 plays, Rodgers capped an impressive drive by hitting Malik Jackson over the middle for a nice 17-yard touchdown pass and a 7-0 lead.

On the opening drive, Rodgers completed each of his five passes for a total of 51 yards.

John Tyler answered with a quick strike two plays later as Damion Miller got behind the Lufkin defense and made a nice grab on a pass from Smith before finishing off the 86-yard touchdown pass. John Tyler mishandled the snap on the extra point, leaving Lufkin with a 7-6 lead.

After the Panthers were forced to punt, their defense came up with the big play with Torrand Grisby recovering a fumble at the John Tyler 28.

Six plays later and facing a fourth and goal, Rodgers found a wide open Jamel Richemond for a four-yard touchdown pass that pushed the Panthers advantage to 14-6.

The Lions answered by driving inside of the Lufkin 5 before eventually settling for a Devan Salazar 27-yard field goal that shrunk the Panthers’ lead to 14-9.

On the following kickoff, a Lufkin miscue left the Panthers at their own 1-yard line. They were able to drive near midfield before being forced to punt.

John Tyler took advantage to get its first lead of the game with Smith scoring on a five-yard touchdown run.

The Lions elected to go for two, with Smith being stopped shy of the goal line, keeping the score at 15-14.

The Lions continued to build on that momentum after forcing Lufkin’s fourth punt of the first half as they drove nine plays on 79 yards with Smith scoring on a 13-yard touchdown run for a 22-14 advantage with 55 seconds left in the half.

The Panthers stole that momentum on the following play as Jackson fielded a kick at the goal line and found a hole before outracing the John Tyler coverage team for a 100-yard kickoff return that made the score 22-21.

John Tyler drove into Lufkin territory before the half but ran out of time, leaving the game up for grabs headed into the second half.

In the opening half, Lufkin struggled to find any answers for Smith, who threw for 229 yards and a touchdown on 15-of-22 passing and ran for 88 yards and two scores on 10 carries.

The Lions finished the opening half with 339 yards of offense.

Lufkin was able to stay in the game with a balanced offense with Rodgers completing 13-of-21 passes for 136 yards and a pair of scores. In addition to his electric kick return, Jackson hauled in four passes for 50 yards and a score.

Kahlil Brown ran for 63 yards on 14 carries.After the teams exchanged punts to start the second half, John Tyler’s offense went back to work to extend its lead back to eight points.

Lufkin’s offense answered with a drive fueled by a strong ground game with Brown powering his way in for a one-yard touchdown run that cut the margin to 29-28 with 3:02 left in the third quarter.

John Tyler took just over a minute to answer with Smith hitting Devien Woods over the middle for a 28-yard touchdown pass that extended the lead to 36-28 with 1:46 left in the third quarter.

The Lions’ defense stepped up on Lufkin’s next play with Martrevious Allison intercepting a pass and returning it to the Lufkin 17. Two plays later, Smith scored on an 11-yard scamper that made it 43-28 with 1:19 left in the third quarter.

Lufkin came back with a 15-play, 75-yard drive that was capped by a Rodgers one-yard touchdown run on fourth down that narrowed the gap to 43-35 with 8:42 left in the game.

The Panthers then got the defensive play they had been looking for all game as Zamarion Johnson picked off a pass and returned it to the John Tyler 19.

The Panthers’ offense took advantage with Rodgers scoring on a two-yard touchdown run. Lufkin then pulled even with Rodgers hitting Javante Ellington for a two-poinit conversion, making it 43-43 with 6:22 remaining.

John Tyler had an immediate answer, marching 91 yards on six plays with Smith hitting Michael Givens-Washington over the middle for a 37-yard touchdown, making it 50-43 with 4:32 left.

The Panthers then put together an impressive drive by driving 65 yards on 13 plays. Rodgers finished off the drive by scoring on a 13-yard touchdown run that made it 50-49 with 1:21 left in the game.

Rather than going for the extra point and the tie, the Panthers elected to go for the win. However, Jontavius Mosley was there to break up the pass and preserve the one-point lead for John Tyler.

Lufkin then attempted an onside kick, which John Tyler recovered.

The Panthers then forced John Tyler into a fourth and one from the Lufkin 40. However, John Tyler gave the ball to Smith, who ran for two yards and a first down to preserve the victory.

Lufkin finishes the season with a 7-4 record. John Tyler moved to 10-1 with the win and will advance to take on Dallas Jesuit next week.