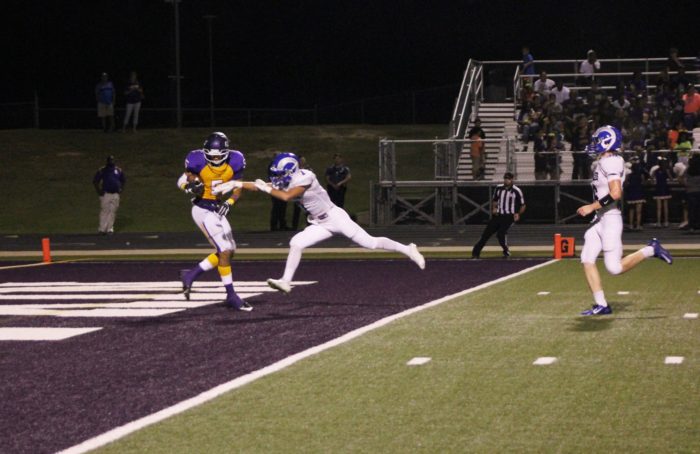 Making the trip across the border to take on a Texas team was nothing new for a Monterrey Prepa Tec team that has grown accustomed to playing their September games north of the border.

However, they weren’t quite expecting what they saw from the crowd at John Outlaw Memorial Field at Abe Martin Stadium. With Lufkin fans filling most of the stands and students filling in the student section, it was quite an experience for players on both sides of the ball.

“We want to expose the kids to different things, and that’s not something every high school team gets to experience,” Lufkin head coach Todd Quick said. “They told us it was the biggest crowd they’ve ever played in front of. That type of crowd is good for us and we don’t need to take it for granted.”

When the action started, Monterrey provided more of a test than some may have expected as it stood toe to toe with the Panthers throughout most of the first half.

With the game tied at 7-7 late in the third quarter, it was apparent that Monterrey players had a win on their minds.

“They were well coached and didn’t make many mistakes,” Quick said. “They took advantage of their opportunities. We had to go take the game from them.”

Lufkin took the game away from Monterrey by dominating the final 27 minutes. After a sluggish opening, the Panthers put on their athletic display to score 28 unanswered points.

Lufkin did the bulk of its damage in the passing game with Kordell Rodgers finding Dhailon Phillips for a pair of long scores that broke the game open.

“We just weren’t quite clicking like we were the week before,” Quick said. “They took away the ground game and made us make plays in the air. Fortunately we were able to do it.”

While the offense had a hard time getting its footing in the early going, the defense was strong from the start.

Outside of one drive in which some key mistakes allowed Monterrey to find the end zone, the Panthers didn’t give their opponents much reason for optimism, a good sign after it struggled to slow down Parkway the week before.

“I was proud of the way the defense came out there on Friday night,” Quick said. “They needed to bounce back after last week.”

Friday’s game also served to get several Panthers in on the action. Even before the game got out of hand, the Lufkin reserves worked their way into the action, which could be beneficial for the teams down the stretch.

“A lot of kids that hadn’t played much got out there and got in the game when it was still close,” Quick said. “A lot of them earned some more playing time for later. That’s going to help us because the fresher we can keep everybody, we’re going to be stronger at the end.”