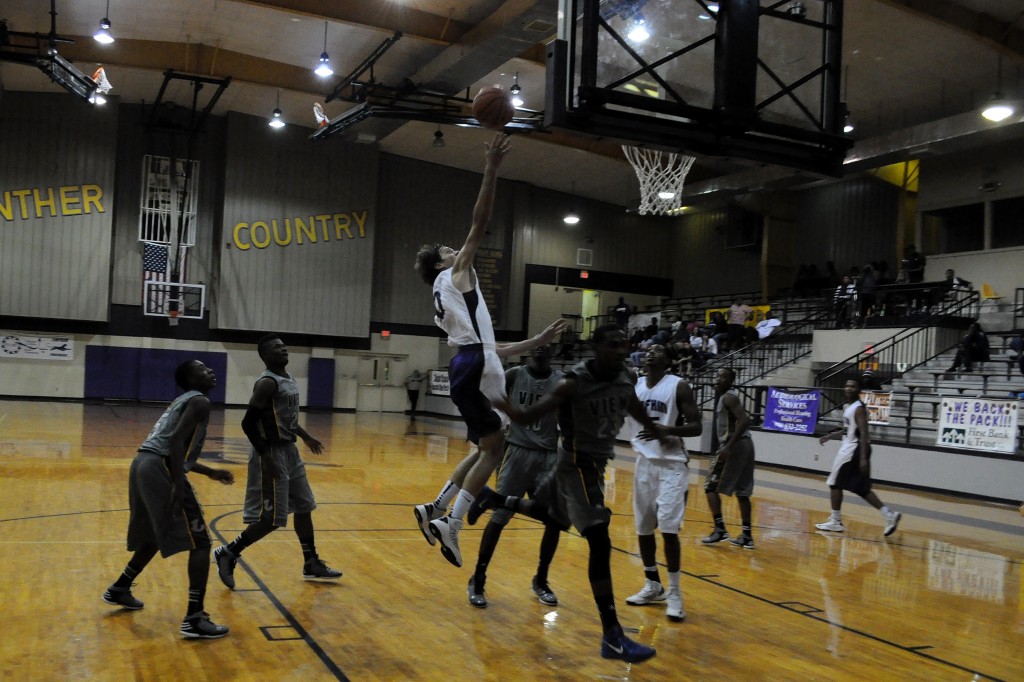 Davis Robinson, 6’3″ Lufkin junior, leaps for the basket during Tuesday night’s game against the Longview Lobos at Panther Gym.

The Lufkin Panther basketball team took down the Longview Lobos, 63-47, at Panther Gym on Tuesday, Dec. 4, setting the Pack at 3-2 for the season.

The Lobos were first to put points on the board with their physically aggressive playing style. Lufkin would answer and build the early lead, which they would hold onto until the Lobos brought the score even at the half, 19-19.

Coach J. T. McManus attributed the heated rivalry on both of the sides of the ball to being away for eight games as well as Longview’s additions to the roster. “Longview added a bunch of players from football who were going to raise their athleticism and they would be fired up coming out of the gate,” said Coach J. T. McManus. “We felt like (offensively) we were in too big of a hurry. We want t play fast, but not in a hurry and we were playing into their hands by trying to do too much.”

A much more focused Panther team hit the court after halftime and built a solid lead. “Defensively, we talked about limiting their offensive rebounds. We held them to three offensive rebounds in the second half and that made it much more difficult for them to score,” said McManus. That strategy showed up on the scoreboard as the Lobos never came closer than ten points to touching the Lufkin lead.

The Pack will suit up for play on Friday for a tournament at Panther Gym. Check back with lufkinpanthersports.com for more details.