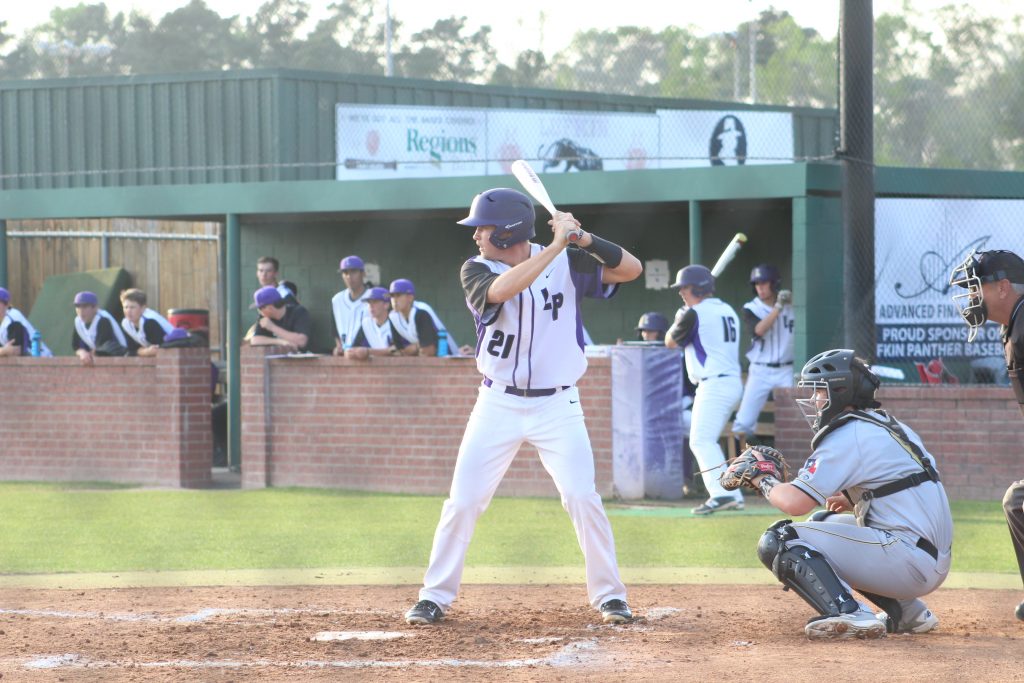 Mere inches away from a key district win, the Lufkin Panthers instead found themselves on the wrong side of yet another heartbreaking defeat as they dropped a 7-5 decision to the College Park Cavaliers in 11 innings in 12-6A action in Lufkin Friday night.

Needing a single run to come away with the win, which would have avoided a season sweep at the hands of College Park, the Panthers’ Jonathan Dewberry was thrown out at the plate in the 10th inning.

The Cavs then seized on that momentum by scoring three 11th-inning runs on their way to beating the Panthers for the third time this season. It was also the second time this season in which Lufkin had dropped an extra inning game against College Park after falling in eight innings three weeks earlier.

With two outs in the 10th inning, Lufkin appeared to get the clutch hit it was desperately seeking as Dylan Murphy hit a clutch two-out single into the outfield. However, Dewberry was tagged just before he could reach the plate.

From there, College Park put up three runs in the 11th inning, seizing control of the game.

As has been the case most of the year, Lufkin didn’t go down easily. Max Quick led off the bottom of the inning with a triple and scored on Dillon McDuffie’s sacrifice fly before the final two batters were retired, sending the Pack to its fifth loss in seven district contests.

Tanner Green worked the final 4 2/3 innings to take the loss for Lufkin. He gave up three earned runs on three hits with two walks and nine strikeouts.

Kolton Eberlan started the game and pitched the first 6 1/3 innings. He allowed four runs, two earned, on six hits and two walks to go along with two strikeouts.

Lufkin was held to a total of five hits in the 11 innings with Quick delivering a single and an RBI. Clayton Gesford, Davis Powell, Murphy and Green had a single apiece. Dewberry drove in a pair of runs while McDuffie also delivered an RBI.

The Cavs struck for a run in the second inning before Lufkin bounced back with three runs in the bottom of the frame.

Gesford led off with a walk and Green hit a single before Riley Durham was walked to load the bases.

The Panthers’ first two runs came around to score off a ball hit by Dewberry, making the score 2-1. Quick was then hit by a pitch with the bases loaded to make the score 3-1.

College Park brought the score back within a run in the third inning before the Panthers answered when Gesford singled and eventually scored on a wild pitch, making the score 4-2.

The Cavaliers knotted the game in the fifth inning when they scored two runs off a ground ball.

The score stayed there until late when the Panthers had their chances to win. Lufkin left the bases loaded in the ninth inning before having the potential winning run thrown out at the plate.

Lufkin will return to action on Tuesday when it travels to face Conroe.