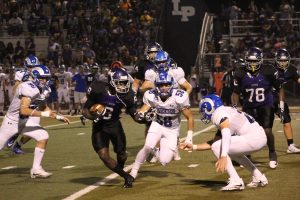 With a momentum-building win against the John Tyler Lions under their belts, the biggest question for the Lufkin Panthers coming into Friday night’s non-district finale was if they could avoid a letdown.

Unfortunately for the visiting Monterrey Prepa Tec Borregos, the letdown never happened and a mismatch ensued. Rattling off 47 unanswered points in the first 26 minutes, the Panthers were never tested in rolling to a 47-7 win at John Outlaw Memorial Field at Abe Martin Stadium on Friday night.

With the win, Lufkin rounded out the non-district portion part of its schedule with a 3-1 record.

“It was good to finish non-district with a win,” Lufkin head coach Todd Quick said. “But starting next week, everybody is 0-0.”

Kewone Thomas had an efficient game through the air as he completed 10-of-14 passes for 216 yards. His top target was Breylon Garcia, who had three catches for 106 yards and a score.

Isaiah Phillips was held under 100 yards for the first time this season although he still found the end zone three times while running for 48 yards before sitting out most of the second half.

“It was the same type of thing as last year,” Quick said. “They loaded the box with seven or eight players and played one-on-one on the outside. When they do that, you have to be able to throw the ball and we did.”

With the win, Lufkin improved its winning streak to three straight games and will enter district action with some big-time momentum.

On the defensive side, Lufkin was able to hold down Monterrey to the tune of 197 total yards. The Borregos were held to 35 rushing yards and didn’t score until Lufkin’s backups had entered the game.

With a mostly packed house made up almost exclusively of Lufkin fans, the Panthers dominated nearly from the opening kickoff on the way to the win.

After Lufkin’s defense forced a punt on the first drive of the game, Malik Jackson returned the following punt 40 yards to the Monterrey 32.

As it had done the previous week, Lufkin immediately went to the ground game with Isaiah Phillips doing the bulk of the damage. He finished the drive with a three-yard touchdown run for an early 7-0 lead. On the drive, he had 25 yards on three carries.

The Panthers added to their total on the next drive with the help of the big play as Kewone Thomas hit Ja’Lynn Polk for a 64-yard pass. Phillips did the work from there, running in for a seven-yard touchdown run that made it 13-0 midway through the first quarter.

Lufkin’s lead grew to 19-0 when Breylon Garcia made a nice 37-yard grab that set up a Thomas one-yard plunge with 12 seconds left in the first quarter.

Lufkin’s defense did its part in setting up the next score with Demond McKelvey making an interception deep in Lufkin territory. Five plays later, Garcia got behind the defense for a 57-yard touchdown pass from Thomas that made it 26-0 with 8:24 left in the second quarter.

The Panthers’ defense came up with another big play on the following drive when Adam Holden ripped the ball out of a receiver’s hands and returned it to the Monterrey 14.

Thomas followed with a 14-yard touchdown pass to Jackson on the next play that made it 33-0 with 3:49 still left in the half.

The Panthers added one final score late in the first half after they recovered the ball on the following kickoff. Phillips turned that play into points with a two-yard touchdown run that made it 40-0 at half.

In the first half, Thomas threw for 210 yards and a pair of scores on 9-of-13 passing. His top target was Garcia, who had three receptions for 106 yards and a score.

Isaiah Phillips did his damage on the ground with 48 yards and three scores on nine carries.

Lufkin just missed out on some fireworks to start the second half as Jackson had a 108-yard kickoff return called back just before he got in the end zone.

That only momentarily slowed down the Panthers as Thomas hit Titan Williams for a six-yard touchdown pass for a 47-0 lead with 10:32 left in the third quarter.

Monterrey was finally able to get on the board with 3:11 left. After a Lufkin turnover deep inside its own territory, Emiliano Cortes Hernandez ran in for a three-yard score that made the final 47-7.

The Panthers (3-1) will open district play on Friday night when they travel to face College Park.