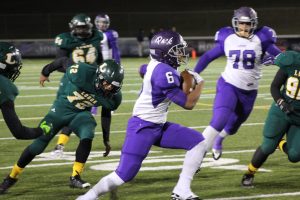 When it comes to openers, they don’t get much bigger than Lufkin/Longview. The Lobos had controlled the series in recent years before the Panthers fought back with a 35-24 win last season.

The Pack will look to make it back-to-back wins against its biggest rival when it makes the trip to Longview on Friday night.

The Panthers are coming off a 7-4 record in 2016 while the Lobos are coming off a share of another district title. However, both teams saw their season end earlier than they would have liked with one-point first-round playoff losses.

That won’t diminish any of the luster when the teams clash at Lobo Stadium Friday night.

Like Lufkin, Longview is trying to break in a new quarterback. Those vying for the job include Adarius Carter, Jordan Lawson and Haynes King.

However, if recent history is any indication, the Lobos’ season will be determined by their running backs behind a physical offensive line.

Jessie Anderson ran for 351 yards and four touchdowns for the Lobos last season. He will be running behind Marcus Williams, a junior who is already drawing Division I interest.

Tight end Jaylin Brown is coming off a season in which he caught 15 passes for 374 yards and nine touchdowns.

“They’re going to line up and punch you in the mouth,” Quick said. “First off we’ll have to stop the run then be ready when they go to playaction.”

At least early in the season, the Lobos’ defense should be the strength of the team. Last season, it allowed 27 points per game but returns several starters.

Ke’Andre Mauldin and J.C. Blakemore are two of the playmakers on the defensive line while Jephaniah Lister and Roshodrick Harmon are key players in the secondary.

“We can’t make a bunch of mistakes and expect to win,” Quick said. “They’re Longview so they’re going to be athletic. It’s a good early test.”

Regardless of the outcome, Quick insists both teams will come away from the game with a better idea of exactly where they’re team stands.

And while there is plenty of emotion when the teams face off, there is always respect when it finishes.

Kickoff for Friday night’s game in Longview is set for 7:30.