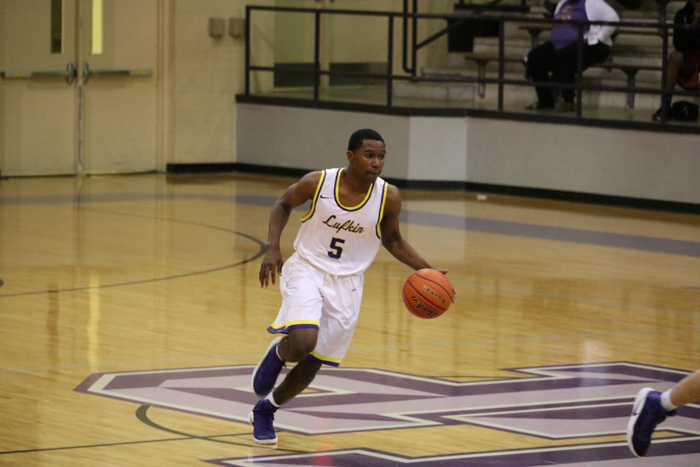 With an early start time for the opener of the 2016 Lufkin Holiday of Hoops Tournament, it took the host Panthers a while to get their wakeup call. Once they finally got going, they simply had too much firepower for an overmatched Diboll Lumberjacks’ squad.

After being tied 33-33 with just over three minutes left in the second quarter, the Panthers outscored the visiting ‘Jacks 47-18 over the game’s final 19 minutes to coast to an easy 80-51 win.

Using a balanced offense in which six players scored at least nine points, the Panthers were able to overcome the one-two punch of Diboll’s Jermarcus White and Dominique Guy, who combined for 39 of the Lumberjacks’ 51 points.

Courtnee Garcia led the way for the Pack with 19 points, while Nick Wilson and Breylon Garcia scored 11 each. Christian Reggie added 10 points while Kordell Rodgers and Jeremiah Davis each had nine.

Despite leading by double digits just five minutes into the game, Lufkin trailed on several occasions and found itself in a 33-33 tie after White’s drive with 3:22 left in the second quarter. The Panthers had the answer with Breylon Garcia and Reggie each hitting a free throw before Wilson scored on a drive. Courtnee Garcia hit a free throw and Rodgers made two free throws for a 40-33 advantage at the break.

After Diboll’s Chris Berry put back a miss to start the third quarter, the Panthers continued to seize control of the game as they scored the next seven points on a Reggie three, a Wilson layup and a Davis jumper.

Diboll’s Guy slowed the momentum with a runner before Davis drained a three and Rodgers made a layup to put the Pack on top 52-37.
Lufkin eventually took a 57-42 lead into the final eight minutes.

In the fourth quarter, Lufkin capped a 12-0 run with a Chris Thompson three that made the score 70-44, allowing the Panthers to coast to the win.

Other scorers for Lufkin were Thompson (6), Kodie Callison (3) and KeVonte Hurts (2).

Lufkin improved to 5-4 with the win.