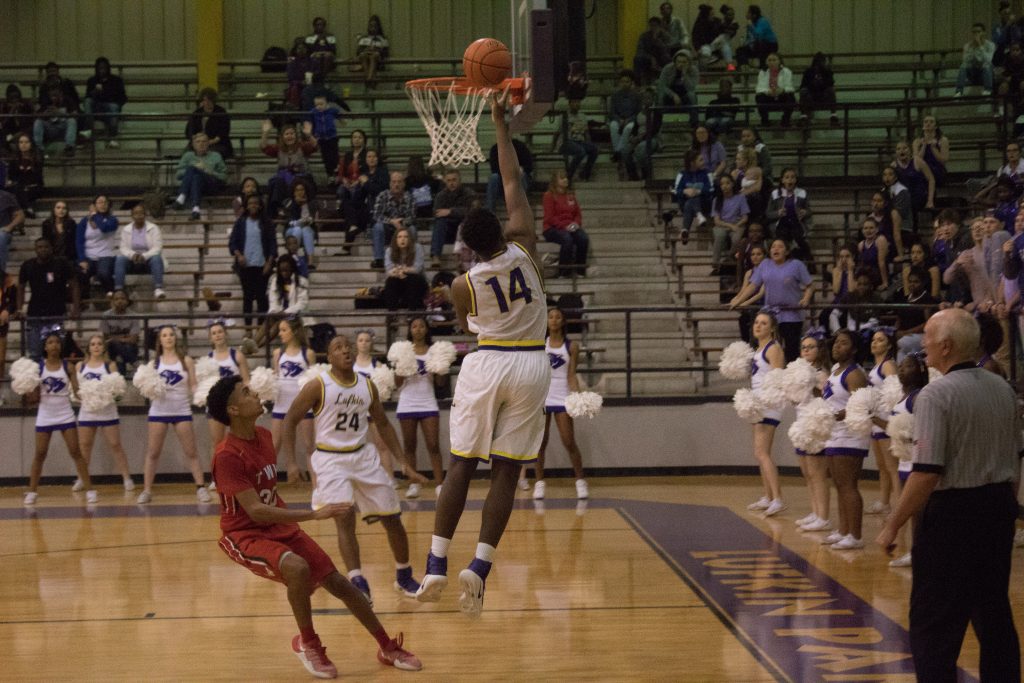 Three losses in their last four games left the Lufkin Panthers facing a rough road just in order to clinch a playoff berth in the regular-season finale. Thanks to one of their most complete performances of the season, that rough road was simply a minor detour.

With the win, the Panthers wrapped up a tie for second place with Conroe in the district race.

That came after Lufkin entered the game knowing a loss could lead to a play-in game just to make the postseason.

Using an outstanding defense and a strong closing kick, Lufkin was able to hand the Highlanders just their second district loss. The Highlanders, who defeated Lufkin in The Woodlands earlier this season, had already wrapped up the district title.

That was enough to offset a 21-point night from KeSean Carter, who scored almost all of his points on drives in the paint. Sammy Williams added 15 points for the Highlanders.

In the early going, the Highlanders looked determined to keep the Panthers out of the postseason party as A.J. Bullard, the son of former Houston Rockets’ NBA champion Matt Bullard, knocked down a pair of threes to give the Highlanders a 14-5 advantage.

Lufkin quickly bounced back as it closed the quarter on a high note with Davis hitting a layup and Rodgers knocking down a three to trim the margin to 16-12 after a quarter.

That was the start of an 11-2 spurt as Callison drained a three and Rodgers hit a layup to give Lufkin its first lead at 17-16.

The Woodlands’ Romelle Wilbert made a bucket to give the Highlanders the lead back before Wilson and Callison hit four straight free throws to put Lufkin on top 21-18.

The Woodlands quickly answered with Carter scoring all 10 points of a 10-2 run that put the Highlanders back ahead 28-23.

Lufkin’s Davis stalled that momentum with a three. JaCourtney Calvin then made a layup that appeared to leave his hands just after the buzzer, narrowing that gap to 30-28.

The Panthers took advantage of that break with a quick 8-2 spurt that gave them the lead back at 36-32. Hurts keyed the run with a jumper and two free throws and Wilson closed it with a putback.

Once again that momentum wouldn’t last long with The Woodlands answering with a 9-2 run that was capped by two more Carter layups for a 41-38 edge.

The Woodlands built the lead to five points before Lufkin’s Calvin scored on a layup and Hurts had a steal and a score to bring the margin to 41-40 after three quarter.

Instead of wilting under the pressure against a talented Highlanders’ team, the Panthers thrived on it as those two scores served as a springboard for a 16-0 run.

Hurts started the fourth quarter with a layup before Wilson scored on a hook shot. Rodgers followed with a tip-in of a miss.

Following that score, the Panthers got the crowd to its feet when Courtnee Garcia hit a three for his only basket of the night and Rodgers knocked down a triple that made the score 60-49 with 4:40 left.

From there, a stunned Highlanders’ team was never able to cut the margin under eight points as they unloaded their bench in the final two minutes of the game.

Other scorers for the Panthers were Calvin (8), Garcia (3) and James Jefferson (2).

Lufkin will learn its playoff opponent later this week. It will start the postseason either Monday or Tuesday night.