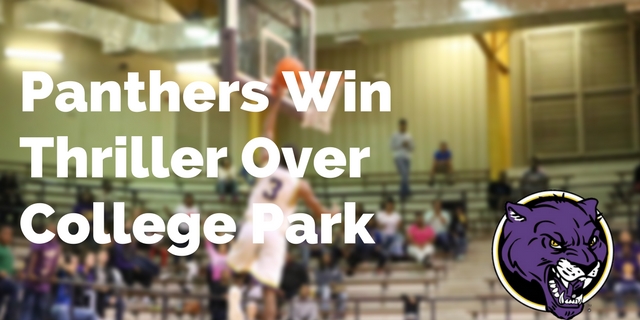 With one of the best juniors in the nation in town for the District 16-5A opener, it was Nick Wilson and the Lufkin Panthers who stole the show in front of the home crowd.

With Wilson leading the Pack with 22 points, Lufkin surged late and held off a final College Park surge to eke out a 62-59 win at Panther Gym on Friday night.

College Park junior Quentin Grimes, one of the most sought after players in the nation, led the way for the Cavs with 20 points but went scoreless in the fourth quarter and a had a missed three and a turnover in the final minute of the game.

Wilson proved to be the difference for the Pack as the Cavs had no answer for him in the paint. He scored 16 points in the second half, helping Lufkin secure a victory in a game it trailed for almost the entire night.

Courtnee Garcia added 11 points as the Pack’s only other double-digit scorer.

However, the difference in the game was the Panthers’ defense, which frustrated Grimes throughout the night despite his 20-point game. Grimes entered the night averaging just under 30 points per game but was held scoreless in both the second and fourth quarters.

He was helped by a balanced scoring effort as Deon Blakemore scored 13 points and Max Gelatas and Shannon Scott each had 12.

After battling from behind for much of the night, Lufkin opened the fourth quarter with a bucket in the post by Wilson and a Chris Thompson three for a 49-48 advantage. Rodgers added a free throw before College Park tied it with a Blakemore jumper that made it 50-50 with 4:43 remaining.

Lufkin answered with back-to-back buckets in the lane from Wilson and Jeremiah Davis before Blakemore hit a shot to narrow the gap back to 54-52.

After Lufkin’s James Jefferson hit a jumper, Blakemore made a three, making it a 56-55 game with 1:41 remaining.

Wilson tipped in a miss before College Park once again answered with two Gelatas free throws that narrowed the Pack’s lead to 58-57 headed into the final minute.

Garcia hit a pair of clutch free throws to put Lufkin on top 60-57 with 24 seconds left.

Grimes attempted to tie the game with a three that was off the mark, but Jordan Turnquest tipped in the miss to make it 60-59 with 15 seconds remaining.

Garcia made one of two free throws for a two-point advantage.

Lufkin’s defense then forced Grimes into another turnover before Rodgers made one of two free throws to make it 62-59.

A desperation heave was well off the mark at the buzzer, giving the Panthers a district-opening win.

In the early going, College Park flexed its muscle by finishing the first quarter with a 7-0 run. Grimes started the run with a three and finished it with a layup to give the Cavs a 22-13 edge after a quarter.

Lufkin used its defense to get back in the game as it held College Park to seven points in the second quarter. Garcia capped the quarter with a jumper that narrowed the deficit to 29-26.
In the third quarter, Lufkin chipped away before a 6-0 run that featured buckets from Wilson, Garcia and Ke’Vonte Hurts gave it the lead at 43-41.College Park was unfazed as it put together an 7-0 run that was capped by a Grimes trey , giving the Cavs a 48-45 edge headed into the final eight minutes.

Other scorers for Lufkin were Rodgers (9), Thompson and Hurts (6), Jefferson (4) and Jeremiah Davis and Rylee Holt (2).

In girls’ action, the Lady Panthers dropped their first District 12-6A game, falling to the College Park Lady Cavaliers, 58-44 in The Woodlands. Lufkin is now 2-1 in district action. The Lady Panthers will travel to face Conroe on Tuesday night.