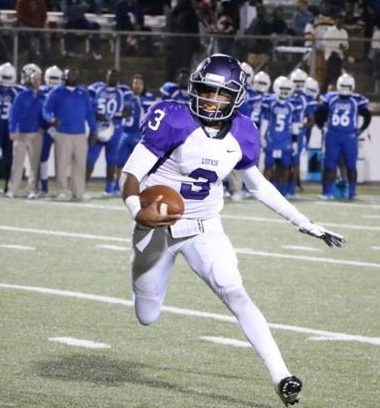 In a district that featured eventual state runner-up The Woodlands, there still weren’t many playmakers with the firepower of Lufkin standout Kordell Rodgers.

That was reflected as he was recently named 12-6A’s Offensive Player of the Year. The quarterback, who put up numbers among the best in the school’s history, earned his honors after leading one of the most dynamic offenses in the state.

In his senior season, Rodgers threw for 3,311 yards and 32 touchdowns with only three interceptions while completing 220-of-348 passes. On the ground, he ran for 336 yards and 11 touchdowns on 90 carries.

He was the headliner for a Lufkin team that had five first-team selections to the team as well as seven second-teamers.

Rodgers had plenty of help on the offensive side with four of the first-teamers being on that side of the ball.

Two of his top blockers were players that paved the way for him as offensive linemen Samuel Weatherred and Joseph Bell were each named to the team.

Rodgers’ top two targets were also on the first-team squad with Dhailon Phillips and Malik Jackson each earning first-team honors.

Rounding out the first-team selections was kicker Rodrigo Molina.

The Panthers also had three offensive players selected to the second team.

Offensive lineman Quynton Cole, wide receiver Javante Ellington and running back Kahlil Brown were each named to the team.

The Woodlands, which won the district and advanced to the championship game before falling to Lake Travis, boasted the District MVP in Eric Schmid as well as Coach of the Year Mark Schmid.

Following is a complete list of 12-6A’s 2016 all-district selections.