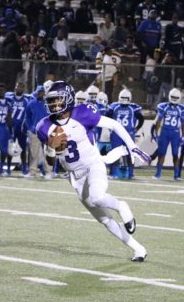 was an honorable-mention selection to the Associated Press’ Class 6A All-State team, which was announced last week.

In earning the honor, Rodgers threw for 3,311 yards and 32 touchdowns with only three interceptions while completing 220-of-348 passes. On the ground, he ran for 336 yards and 11 touchdowns on 90 carries.

In addition to those awards, he was also named the district’s Offensive MVP.

Rodgers was the only Panther to earn an honor on the statewide team.