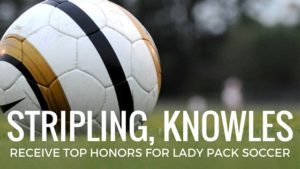 With back-to-back titles already in tow, Lufkin’s Kaela Stripling and Katelyn Knowles once again hauled in the postseason hardware as the District 16-5A All-District Team was recently announced.

A year after being named the district’s Co-Defensive Player of the Year, Kaela Stripling turned it up a notch by earning District MVP honors.

Lufkin’s honors didn’t stop there as Katelyn Knowles made it back-to-back by earning Offensive MVP for the second straight season.

In addition, Lufkin’s Antonio Encarnacion won Coach of the Year honors while five players were named to the first-team all-district squad.

“This year it took a lot for us to win another district title,” Encarnacion said. “It was much more competitive than last year and we had to get contributions from the entire team. I think it shows how much of a team effort it was with all the girls that earned these honors.”

Stripling took her game to yet another level in her third year with the team.

“She doesn’t have a whole lot of stats, but our offense starts with our defense,” Encarnacion said, “and she starts the offense. She gives us a chance to win against anybody we play against.”

Knowles earned her offensive honor after leading the district in goals for the second straight season.

That came despite defense’s concerted efforts to keep her off the board.

“Teams remembered her from last year and she was targeted much more this season,” Encarnacion said. “Despite that, she still did a good job of scoring goals for us. She scored in each district game except for two or three of them.”

Encarnacion was also a repeat winner as the district’s coach of the year.

“I have to thank the fellow coaches for voting me for that award,” Encarnacion said. “But all the credit really goes to the girls. I just put them out there and they make me look good.”

“We took everybody’s best shot this year and managed to get through district without losing a game,” Encarnacion said. “We had girls that were hurt, and the next one would step right in. We played hard for 80 minutes every time out there and each girl that was honored, really deserved it.”

In addition to those honors, Knowles and Horn were also selections to the TASCO All-Region Second-Team.

“Abby was second on our team in goals right behind Katelyn this year,” Encarnacion said. “She is a junior and has been on the varsity for three years. She’s a very important part of the team.”
Stripling also earned honorable-mention honors on the team.

In addition to their accomplishments on the field, Lufkin also had four players named to the academic all-state team. In order to qualify for that squad, players had to be with the program for four years and have a grade point average of at least 90.

Melinda Tang, Silvia Santoyo, Anna Reyes and Yari Cortes were each named to the team.
“This showed that the girls worked hard not only on the field but also in the classroom,” Encarnacion said. “That’s the most important thing for them.”