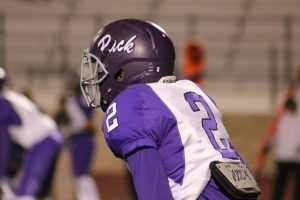 A former Lufkin Panther is making some big-time waves at the collegiate level as Keke Coutee has become the biggest playmaker on a Texas Tech team known for putting points on the scoreboard.

Through Texas Tech’s first two games of the season, Coutee currently leads all FBS teams with 142.5 receiving yards per game.

He currently has 17 receptions for 285 yards and three touchdowns.

In a season-opening 56-10 win over Eastern Washington, Coutee had five catches for 99 yards and a pair of touchdowns.

He followed that with an even bigger game in Texas Tech’s 52-45 win over Arizona State as he had 12 receptions for 186 yards and a touchdown.

Coutee is a Lufkin graduate who was one of the Panthers’ top receivers in his three seasons with the team.

Local fans can make the short drive to Houston on Saturday when Coutee and the Red Raiders take on the Houston Cougars on Saturday morning at 11. That game can be seen on ABC.