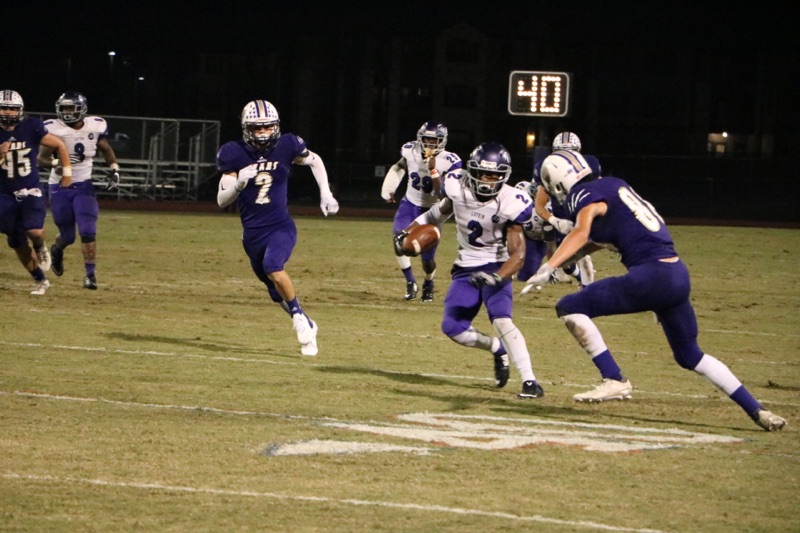 MONTGOMERY – With their playoff spot locked firmly in place, the Lufkin Panthers showed they were anything but satisfied. Using a third straight strong defensive effort mixed with another big night from its potent offense, Lufkin used a dominating second half to end the regular season with a 40-21 win over the Montgomery Bears.

Next up for the Panthers is a first-round maatchup against their long-time rival John Tyler in a game that will be played at Tyler’s Trinity Mother Frances Rose Stadium on Friday night.

“We got out of here with everybody we started with in pretty good shape,” Lufkin head coach Todd Quick said. “We’re ready. Let’s get it on.”

Lufkin’s defense allowed 21 points for the third straight game on a night in which it controlled much of the answer.

The Panthers were able to force three turnovers and limit Montgomery’s big plays in capturing its third straight win.

“Defensively we have to keep getting better at what we’re doing,” Quick said. “We have some things that need to be fixed.”

The Lufkin offense had another strong night by rushing for 293 yards on its way to 520 total yards. Kahlil Brown finished with 136 yards and three touchdowns on 23 carries.

Kordell Rodgers threw for 227 yardes and a touchdown on 17-of-28 passing. He also ran for 88 yards and two touchdowns on just nine carries.

“When they play five in the box, we’re going to run the football,” Quick said. “It’s totally opposite of what they’ve been showing all season. You have to be able to adjust to what they show.”

Even though playoff positioning wasn’t on the line, the Bears pulled out all the stops in the first half.

Montgomery started the game by recovering an onside kick off a trick play. However, the Panthers recovered a fumble to keep the Bears off the scoreboard.

Lufkin had a miscue of its own on the following drive. Facing a fourth down, Rodgers hit Malik Jackson for an apparent 32-yard touchdown. However, he was a yard past the line of scrimmage when he made the throw on an illegal forward pass that ended the drive.

On Lufkin’s following drive, the Panthers dropped a sure-fire touchdown pass before finally getting on the board as Javante Ellington caught a short pass and ran 19 yards for a touchdown and a 6-0 lead. A miscue on the snap forced Lufkin into an incomplete on the point-after try, leaving the Panthers with a six-point lead.

The Panthers’ defense then came up with a key play as March Thomas stripped the ball from a Montgomery runner and recovered it, giving them the ball at their own 42.

Six plays later, Kahlil Brown scored on a three-yard run for a 13-0 advantage.

Montgomery answered with its only scoring drive of the first half as it went 70 yards on eight plays with Jordan Hood scoring on a three-yard quarterback keeper that narrowed the gap to 13-7.

Montgomery was on the verge of taking the lead after it recovered a fumble, but Lufkin’s Jeremiah Davis turned the tables by recovering a fumble of his own and returning it to the Bears’ 31.

Lufkin’s Brown took advantage of the miscue by scoring on a four-yard touchdown to give the Panthers a 20-7 lead midway through the fourth quarter.

Montgomery got back in the game on the opening drive of the second half by driving 69 plays on eight plays before Hood hit Alex Nunn for a six-yard touchdown pass to narrow the margin to 20-14.

Lufkin’s offense answered with an impressive drive of its own, methodically marching 64 yards on 10 plays with Rodgers scoring on a three-yard QB keeper that brought the lead back to 13 at 27-14 with 6:23 left in the third quarter.

The Panthers’ defense came up with a three and out and the offense drove 78 yards in six plays with Brown scoring on a seven-yard run for a 34-14 advantage with 4:51 left in the third quarter.

Lufkin continued its second half dominance on its following drive as Rodgers capped off an 11-play, 58-yard drive by walking in for a one-yard score that made it 40-14 after another mishandled snap.

Montgomery then took to the ground on the following drive with Taurean Bradley capping off a 10-play, 52-yard drive with a seven-yard touchdown run to make it a 40-21 game.

Lufkin finished off the regular season with a 7-3 record and a 4-2 district mark, which left it in third place in 12-6A.

Montgomery finished with a 6-4 overall record and a 3-3 district mark.