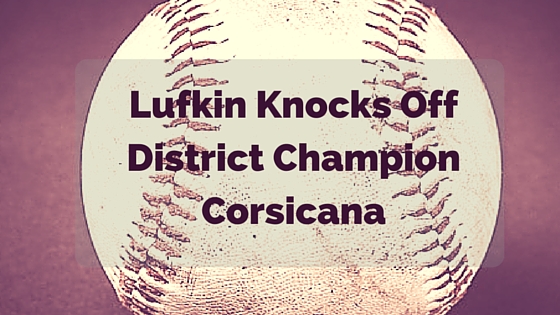 With a playoff spot already in hand, the Lufkin Panthers’ baseball team hit the road and picked up a come-from-behind 6-4 win over the district champion Corsicana Tigers on Wednesday night.

Logan Lair picked up the win on the mound, Christian Stephens was strong in relief and the Panthers avenged an earlier 2-1 extra-inning loss while handing the Tigers their first loss in district action.

Lair worked the first four innings and allowed three earned runs on four hits with a walk and a strikeout in four innings to earn the win.

Stephens earned the save by pitching the final three innings. He allowed one earned run on one hit with two walks and two strikeouts.

Meanwhile the Panthers made the most of five hits, scoring four runs in the fourth inning to erase an early 3-0 deficit.

Lufkin fell in an early hole as Corsicana struck for a pair of runs in the first inning. Jackson Kennemore got the Tigers on the board with an RBI double then came around to score on a Lufkin error.

That lead grew to 3-0 in the second inning as Zach Mahoney singled and eventually came around to score on a Layton Wolver sacrifice fly.

That lead stood until the fourth inning when Lufkin struck for four runs. Adrain Pena reached base to start the inning before Manuel Garcia reached on an error. The Panthers loaded the bases when leadoff man Jonathan Dewberry drew a walk.

Luke Rowley followed with an RBI single to put the Pack on the board and Garcia came around to score on a Blake Lazarine groundout that narrowed the gap to 3-2.

Haylen Green then brought home another run with an RBI groundout that evened up the game at 3-3.

Lufkin took the lead at 4-3 when Max Quick came through with an RBI single.

The Panthers added a pair of runs in the sixth inning. Quick started the rally with a walk then came around to score on an RBI triple by Tanner Green. Pena delivered an RBI single that brought Lufkin’s lead to 6-3.

Corsicana cut the margin to 6-4 when Kennemore smacked a solo home run in the seventh inning.

The Tigers then put two runners on base, but with the potential game-winning run at the plate, Stephens struck out the final batter of the game to preserve the win.

Trevor Nolen took the loss on the mound for Corsicana, allowing four runs, one earned, on three hits and three walks in four innings of work.

The Panthers will close out the regular season on Friday night when they host Jacksonville for Senior Night.