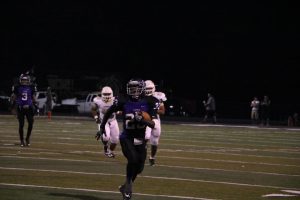 Needing a single win in the last two weeks to lock up a home playoff game in the postseason opener, the Lufkin Panthers left nothing to chance. With the Lufkin offense racking up more than 500 yards, the Panthers were able to finish the job in convincing fashion, rolling to a 49-28 win over the Conroe Tigers at Moorhead Stadium.

With the win, Lufkin clinched an opening-round home playoff game against Rockwall Heath. However, Quick said the Panthers will need to show improvement in order to make the playoff run they hope for.

“We have to play better than that,” Lufkin head coach Todd Quick said. “It’s a mental thing and we can’t let that happen. That’s not us and we have to get that fixed.”

Lufkin got a big night from a trio of offensive playmakers with Isaiah Phillips running for 161 yards and two touchdowns on 19 carries.

Kewone Thomas threw for 270 yards and three touchdowns on 15-of-22 passing.

His top target was Ja’Lynn Polk, who caught seven passes for 137 yards and two scores. Much of that came after Lufkin’s leading receiver Malik Jackson left with an injury in the first half.

“When (Jackson) comes off the field, someone has to pick up the slack,” Quick said of Polk. “I was proud of him. He made plays all over the field and that’s better than he’s played this year.”

On the defensive side, Lufkin gave up 389 yards of offense although it was never really threatened.

Conroe’s standout running back Donaven Lloyd ran for 111 yards on 22 carries although most of that damage came late in the contest.

Jordan Black threw for 259 yards and three touchdowns but completed only 12-of-34 passes.

The first half was controlled by the Panthers, although Conroe was able to make enough plays to stay within striking distance.

The Tigers foiled some early trickery by recovering a game-opening onside kickoff attempt before needing just three plays to cover 53 yards. The drive was capped by a 26-yard touchdown run from Isaiah Phillips for a 7-0 lead before a minute had even ticked off the clock.

Lufkin was able to withstand a special teams miscue with the help of a Jeremiah Davis interception. That allowed the offense to go back to work as Tre Grant had an 18-yard run that set up his own one-yard touchdown rush for a 14-0 lead with two minutes left in the opening quarter.

However, Lufkin missed a field goal that would have made it a three-score game before Conroe got on the board thanks to the trick play with Jalen Allen taking a handoff and hitting a wide open Travis Null for a 36-yard touchdown that narrowed the gap to 14-7.

The Panthers responded just over a minute later when Malik Jackson found himself in single coverage and took advantage by hauling in a 51-yard touchdown pass from Thomas that made the score 21-7 with 6:29 left in the second quarter.

Conroe answered by cutting it to a one-score game for the second time when Brandon Schantz made a juggling catch for a 32-yard touchown reception from Jordan Black, narrowing the gap to 21-14 just over a minute later.

Lufkin had an even quicker answer with Thomas hitting Ja’Lynn Polk over the middle for a 56-yard touchdown pass two plays later for a 28-14 lead that it eventually carried into the half.

In the opening half, Lufkin outgained Conroe by a total of 300-147 with Phillips leading the way with 104 yards and a touchdown on 11 carries.

Thomas threw for 162 yards and two touchdowns on 7-of-13 passing. His top two targets were Jackson and Polk, who combined for six catches for 160 yards and two scores.

That lead grew to threee scores on Lufkin’s first drive of the second half when Thomas hit Polk over the middle for a 29-yard touchdown that upped the lead to 35-14 with 8:56 left in the third quarter.

Conroe used the big play to make it a two-score once again when Black hit Patten for a 53-yard touchdown pass that made it 35-22 after a converted two-point conversion.

As was the case most of the night, Lufkin had an immediate answer with Phillips scoring on a 15-yard touchdown to bring the lead back up to 42-22.

The Panthers added to their tally with Grant scoring on an 11-yard touchdown run that made it 49-22 with 6:03 left in the game.

In the final minute of the game, Black hit Schnautz for a 33-yard touchdown that made the final score 49-28.

The Panthers (7-2, 4-1) will wrap up the regular season on Friday night when they host Montgomery.