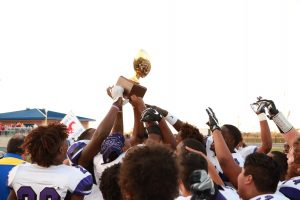 CORSICANA – A dominating win over the Rockwall Heath Hawks a week earlier snapped a string of four straight one-and-done playoff finishes for the Lufkin Panthers. On Saturday afternoon, the Panthers showed they were no one-hit wonders in more ways than one.

Using a hard-hitting defense and a punishing running game, the Panthers overcame a shaky first quarter before coasting to a 35-18 win over the Richardson Pearce Mustangs in Class 6A Region II Area Playoff action at Corsicana High School on Saturday afternoon.

With the win, Lufkin moves on to the third round of the playoffs for the first time in five seasons where state powerhouse Spring Westfield Mustangs will be awaiting the Panthers. That game will be played on Saturday afternoon at 1:30 at New Caney High School.

To get to that point, Lufkin used a dominating finish in which it scored 28 unanswered points after falling in an early 10-7 hole.

“I thought we played different in the second half, which is the way we’ve been playing all year,” Lufkin head coach Todd Quick said. “We’ve got a two and a half hour bus ride home and we can celebrate this one until we get there.”

As has been the case for much of the season, the Lufkin defense held its own while the offense was able to work its way into the game.

The Panthers allowed 244 total yards of offense. That included holding a usually potent Pearce rushing attack to 81 yards on 33 carries.

Bo Brewer finished with 163 yards on 16-of-34 passing with two touchdowns and three interceptions. He was hurried throughout the game, a key that led to the Panthers’ three takeaways.

“We got some shots on him,” Quick said. “He made some good throws and they made some good catches, but I was proud of the way the defense played, especially from the second quarter on.”

On the offensive side of the ball, it was the grinding offensive line combined with the rushing of Isaiah Phillips and Kewone Thomas that controlled the game on a day where the passing game struggled.

Phillips finished with 192 yards and three touchdowns on 22 carries while Thomas ran for 82 yards and a touchdown on 13 carries. The Panthers finished the night with 322 yards on 45 carries.

“I was proud of the way the offense played in the second, third and fourth quarters,” Quick said. “The offensive line controlled the game, Kewone ran it well and Isaiah ran it right up the pipe.”

The first half featured a defensive first quarter before the offenses found their footing in the second quarter.
Pearce seized the momentum in the early going as Kewone Thomas threw an interception on Lufkin’s third offensive play before the Panthers were called for a roughing the passer on the next snap.

Thatproved to be the first of eight Lufkin penalties in the first half that cost the Panthers 75 yards.

However, the Lufkin defense eventually forced a punt.

The Mustangs’ offense got going on the next drive on a short drive that was capped by a Daniel Davies 27-yard field goal for a 3-0 lead with 5:05 left in the first quarter.

Just over a minute later, Lufkin was hit with a big blow when starting receiver Breylon Garcia had to be carted off the field after a leg injury that stopped the action for 20 minutes while an ambulance made its way to the stadium.

Lufkin’s offense finally found its way on the fourth drive of the game on a crisp possession that covered 80 yards on nine plays. Phillips capped the drive with a nine-yard touchdown run to the left side of the end zone for a 7-3 lead with 10:10 left in the first half.

Pearce had an immediate answer on a drive that finished with a trick play with QB Bo Brewer finding a wide open offensive lineman Clay Servin for a seven-yard touchdown pass, giving the Mustangs a 10-7 lead midway through the second quarter.

Lufkin had the answer once again with Tre Grant scoring on a nine-yard run on his first carry of the game, putting the Panthers in the lead 14-10 at the half.

In the opening half, Phillips led Lufkin’s offense with 94 yards and a touchdown on 11 carries while Thomas ran for 33 yards on six carries, although he struggled through the air, completing 3-of-13 passes for 28 yards.

Brewer threw for 83 yards on 8-of-17 passing, but Lufkin held Pearce to a total of 131 yards in the first half.
Lufkin kept that momentum going in the second half.

Afternoon Pearce missed a wide open receiver for a potential touchdown, the Mustangs were forced into a three and out. Lufkin had the quick response with Phillips breaking free for a powerful 43-yard touchdown run to the Pearce 6 yard line.

Two plays later, Thomas scored on a five-yard quarterback keeper to extend the lead to two scores at 21-10 with 10:18 left in the third quarter.

Following another three and out, the Panthers’ offense continued to roll over the Mustangs with a seven-play 45-yard drive that was capped by a Phillips’ one-yard touchdown plunge, upping the margin to 28-10 with 5:39 left in the third quarter.

Pearce’s next drive ended when Trey McDaniel made a spectacular interception deep inside Lufkin territory, but Lufkin was held to a three and out on the following possession.

Undeterred, Lufkin’s Savon Fields came up with an interception on the following drive to give the Panthers the ball near midfield.

That helped set up the knockout blow as an 11-yard touchdown run from Phillips upped the margin to 35-10 with 7:54 left in the game.

Pearce finally ended a string of 28 straight Lufkin points when Brewer hit De’Astone Barlow for a four-yard touchdown pass then connected with Quin Boughton on the two-point conversion to narrow the gap to 35-18 with 4:55 left in the game.

But after Pearce recovered an onside kick, Demond McKelvey came up with an interception near midfield that allowed the Panthers to end any remaining hopes for Pearce.