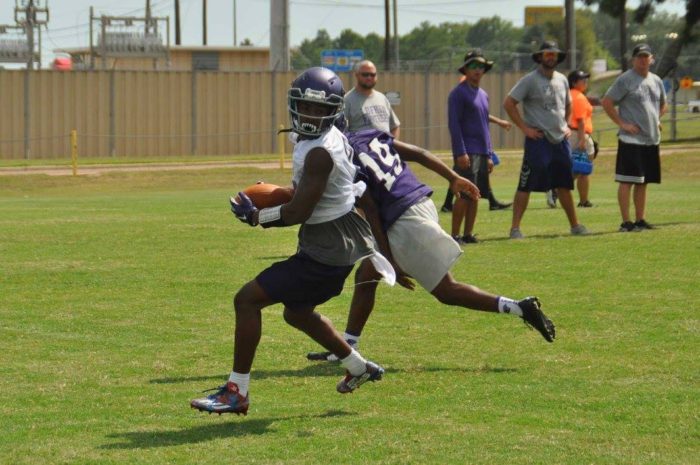 With returning playmakers to spare, the Lufkin Panthers’ offense is ready to light up the scoreboard in the 2016 season. After averaging close to 36 points per game, this year’s Panthers are ready to set that bar even higher.

If last season’s numbers are any indication of what is to come, Lufkin opponents will have their hands full in the team’s return to 6A.

“With the guys we have back, we know we should have a head start there,” Lufkin head coach Todd Quick said. “Now we have to put it all together. We can’t just show up and think it’s going to come easy.”

One of the biggest reasons for optimism is the return of Kordell Rodgers at quarterback. Rodgers, a Texas State commit, was the district’s Offensive Player of the Year last season and is the preseason 12-6A

Offensive Player of the Year, according to Dave Campbell’s Texas Football.

“Having him back there makes things so much easier,” Quick said. “He’s been really crisp and the communication between him and the receivers has been really good.”

Rodgers will have plenty of weapons to work with as three of his top targets from last season return to the team.

Malik Jackson had 37 catches for 446 yards and two touchdowns and Javante Ellington made 24 receptions for 371 yards and six scores.

Another option at wide receiver is Breylon Garcia, the son of former Lufkin Panther and Arkansas Razorback Desmond Garcia. Jeremiah Davis, who will also see action at quarterback, will also play at receiver.

“Dhailon cut his time in the 40 and he’s really good on the edge,” Quick said. “Breylon is a big tall receiver. On the inside, Malik is really quick. Javante is a smaller guy but he’s quick and can catch passes on the inside.”

The Panthers also have another playmaker at running back with the return of Kahlil Brown. He finished strong last season, finishing the year with 402 yards and seven touchdowns on 64 carries.

“He started the last four games for us last year,” Quick said. “He was our guy in that stretch and he’s in great shape.”

The biggest question mark on offense for the Panthers will be on the offensive line.

Hunter Hollis started at tackle as a sophomore and has moved to guard. Joseph Bell played both guard and tackle last season.

Andreus Hadnot, who stepped in at center after a Blake Lazarine injury last season, will be back at the same position as a senior.

Sam Weatherred and Quynton Cole are two other options on the offensive line.

“We’re still working guys into the rotation there,” Quick said. “That’s the area that always takes the longest to come along.”