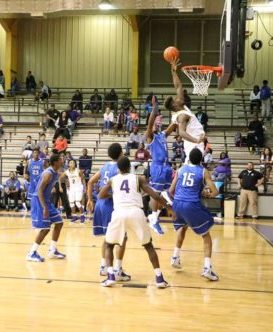 Just hours after breaking for the Christmas holidays, the Lufkin Panthers and John Tyler Lions gave hoops fans a holiday treat in a triple-overtime thriller.

Thanks to a 24-point night from Christian Reggie and the clutch play of Kordell Rodgers down the stretch, the Panthers sent the home fans happy, outlasting the Lions 93-91 in a non-district classic.

Kordell Rodgers drained a clutch game-tying 3-pointer with two seconds left in the second overtime and the Panthers made enough plays in the third overtime to wrap up a hard-fought victory.

Reggie led the Panthers with 24 points, while Jacourtney Calvin had 16. KeVonte Hurts had 15, Chris Thompson added 13 and Rodgers scored eight of his nine points after regulation.

Mashaud Moore led the Lions with 29 points. Bryson Smith, who led the Lions to a thrilling 50-49 win over the Panthers in playoff football action five weeks earlier, scored 22 points off the bench and Daecorian Jessie and Kadavian Key had 15 each.

After a back and forth three quarters, the Lions and Panthers exchanged big shot after big shot in the final eight minutes.

After Lufkin took a 66-64 lead on a Breylon Garcia jumper with 2:11 remaining, John Tyler took the lead on a Key jumper and a Moore putback.

The Panthers tied it up when Garcia put in a layup with 55 seconds remaining.

Lufkin came up with a stop and had a chance to win it in regulation before being called for an illegal screen. The Panthers’ defense responded with another stop that sent the game into overtime.

John Tyler’s Smith tied it on a layup before Rodgers came up with two clutch free throws to give the Panthers a 77-75 lead with 30 seconds left.

The Lions knotted the game up on Moore’s drive with 16 seconds remaining.

Lufkin put together a nicely executed lay with Thompson getting a contested layup at the buzzer, but it was just off the mark, sending the game into double overtime.

From there, a seemingly tired Lufkin team seemed to be on the ropes as it went without a point in the first three and a half minutes. In the process, John Tyler built an 82-77 lead on a Moore backdoor layup, a Key drive and a Christerpher Lyles free throw.

Lufkin finally broke the drought with a Calvin layup before calling a timeout. The Panthers then called a timeout to set up its pressure defense and it paid off with Thompson intercepting a pass and laying it in, narrowing the gap to 82-81 with 21 seconds remaining. 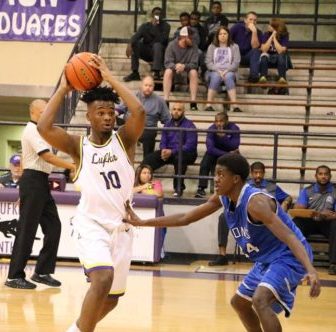 John Tyler’s Smith answered by knocking down a pair of free throws with 14 seconds remaining.

Then with time running out, Rodgers rose up and nailed a clutch 3-pointer with two seconds left that forced a third overtime.

The Panthers made the most of the opportunity as John Tyler had three free throws sandwiched around a Hurts’ three, making it 87-87 with two minutes left.

Garcia scored in the paint and Rodgers had a steal and a layup to make it 91-87. John Tyler’s Moore and Lufkin’s Rodgers exchanged free throws to make it 92-88 with just 11 seconds left.

Fittingly, John Tyler didn’t go down without a fight as Key banked in a three from well behind the line to make it 92-91.

Lufkin’s Thompson then made a free throw and Key’s three-point try from halfcourt was well off the mark as time expired, giving the Panthers a hard-fought win.

The teams battled to a tie after a quarter before Lufkin went into the break with a 36-32 lead after a Hurts layup at the buzzer.

Tyler trimmed that margin to 55-50 headed into the fourth quarter.

The Lions answered by scoring the first six points of the fourth quarter to set up the wild finish.

Other John Tyler scorers were Gerald Berry Jr. and Lyles (3) and Brad Blaylock and Darryl Moore (2).

Lufkin will have its final game before the Christmas break on Monday as it travels to face Livingston in a game set for a 3:30 p.m. start.