Even when not at best, Lufkin too much for revitalized Nacogdoches
Early Schedule Presents challenges for Pack 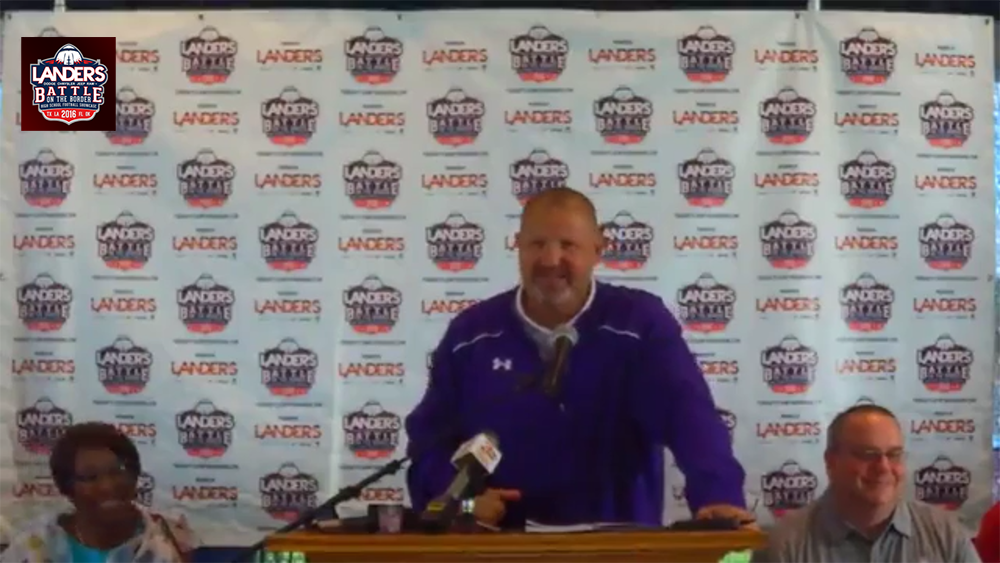 Coach Quick at Wednesday’s Battle of the Border news conference in Shreveport.

When it comes to Shreveport’s Battle on the Border, the Lufkin Panthers have seen it all.

Two seasons ago, they stood toe to toe with a nationally-ranked John Curtis team before falling just short in a 32-25 decision.

Last season, it wasn’t any easier against national powerhouse West Monroe when the Panthers found themselves on the wrong end of a 44-36 decision in a game that ended after midnight.

It won’t be any easier for the Panthers this season as they take on a powerful Parkway Panthers’ team on Saturday afternoon. Parkway is ranked No. 1 in Louisiana in Class 5A by Maxpreps. That same poll has Parkway ranked third among all classifications in Louisiana.

“They’ve got a lot of good players with a couple of real big-name guys,” Lufkin head coach Todd Quick said. “The name guys are the ones that draw your attention, but the other ones are some really good football players.”

Parkway’s prestige seems to be well deserved as it features some of the top talent both in the state and in the nation.
The team is led by Terrace Marshall, a junior who is considered to be one of the best receivers in the 2018 recruiting class. He didn’t disappoint in a season-opening 49-20 win over Bastrop, making eight catches for 163 yards, including a 65-yard touchdown pass.

According to several recruiting outlets, he is considered the nation’s top wide receiver recruit in the 2018 class. He has offers from Alabama, LSU, Oklahoma, Oklahoma State, TCU, Auburn, UCLA, Texas A&M, Miami, North Carolina, Arkansas, Tennessee and Baylor among others.

“He’s really good,” Quick said. “He’s got a big body, runs well and catches the football. We have to figure out the right times to double team him and make somebody else a play or the times we just have to line up and try to slow him down.”

However, Parkway is far from a one-man show as QB Justin Rogers threw for 293 yards and two touchdowns on 18-of-28 passing in the opener.

He is a four-star recruit that currently has offers from LSU, Mississippi State, Missouri, Arkansas and Houston, among others.

“He’s 6-foot-4 and throws well,” Quick said. “He’ll read a coverage and if the throw isn’t there, he’ll pull it down and run. He reminds me a lot of Kordell (Rodgers).”

Another favorite target of Rogers is E.J. Wiliams, who caught 11 passes for 80 yards and a pair of scores in the opener. Robert McKnight had four catches for 65 yards.

“You put together all the pieces for them and it’s a pretty good group,” Quick said. “We have to be sound defensively and be sure they earn everything.”

Parkway isn’t a pushover on defense either as it allowed just 35 rushing yards in the opener. However, it also allowed 296 passing yards, a number not quite as alarming since it was playing with the lead for the majority of the game.

“They’ve got two kids up front that are upper level guys,” Quick said. “Those guys really stand out on film and the other two up front are pretty good. We need to limit penetration, get a body on them and try to disrupt them.”

In addition, Parkway’s special teams got into the action with David Morales blocking a punt and Johnathon Jones returning it 41 yards for a score.

“They’re a good team in all phases of the game,” Quick said. “They’re the type of team that can make you better. But don’t make any mistake about it, we’re going down there to whip their butts.”

Kickoff for Saturday’s game at Shreveport’s Independence Stadium is slated for 4 p.m.