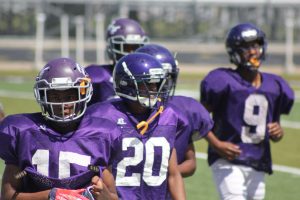 With two weeks of practice almost in the books, the Lufkin Panthers are ready to get their hits in against some unfamiliar faces. They’ll get that chance on Friday night when they travel to Huntsville for the only scrimmage in leading up to the 2017 season.

Lufkin opened practice on Aug. 11, going four full days before putting on the pads due to mandatory UIL rules. Lufkin is now in the middle of the grind of summer camp with the regular season just over a week away.
While the results aren’t the most important part of Friday’s scrimmage, the team is still ready to see how it stacks up against another opponent.
“The biggest thing is getting to go against somebody else,” Lufkin head coach Todd Quick said. “Things get a little chippy when you’re seeing the same person day in and day out.”
Huntsville is coming off a 4-6 season in 2016. While Quick admits that even though there isn’t any elaborate game planning for the scrimmage, the Hornets will provide Lufkin with a good early test in seeing some top-level athletes.
“They’re athletic, they’re big and they can run,” Quick said. “They’re going to line up and hit us in the mouth and we’ll see how we react. It’s the old saying that everyone has a plan until they get hit in the mouth.”
Friday’s scrimmage will start with the JV and freshman teams competing against each other at 5 p.m.
The varsity scrimmage will start at 6:30. It will start with drills of the offensive line going against the defensive line before the skill players go against each other in 7-on-7 types of drills.
Each team will then have three sets of 10 plays each with the first-and-second teamers exchanging series.
Following that, there will be two 12-minute quarters of live action.
“We’re going to get after it,” Quick said. “You want them to play hard whether it’s practice, a scrimmage or a game.”
Friday’s scrimmage will take place at Huntsville High School, which is located off the Fish Hatchery Road exit.
Tweet Pin It