Panthers kick off season with big-time showdown
Ambit Energy Game of the Week is Online! 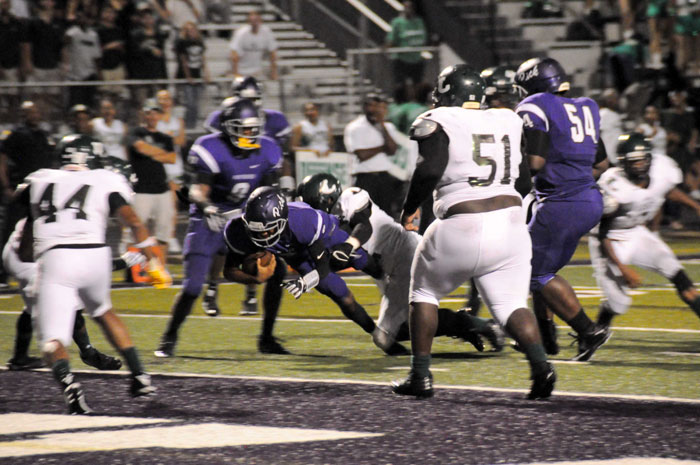 Kordell Rogers leaps across the goal line with 1:36 left on the clock in the 4th to cinch Lufkin’s win at home against the Longview Lobos. (Photo: Misty Boggs)

Nine months felt like an eternity for the Lufkin Panthers. When they got another crack at the Longview Lobos, they weren’t going to let it slip through their fingers.

Kordell Rodgers threw for 184 yards and a touchdown and ran for two scores and the Lufkin defense made the plays down the stretch to come away with an exciting 35-24 win over the Lobos in the season opener at John Outlaw Memorial Field at Abe Martin Stadium on Friday night.

With the win, Lufkin ended a three-game losing streak against its biggest rival, getting a bit of redemption after a 2015 season that started and ended with losses to Longview.

“Its big because it’s at home, its Longview and it’s the first week of the season,” Lufkin head coach Todd Quick said. “But what’s more important is that we have to get better, but tonight was a good start.”

The Panthers were able to get a season-opening win thanks to reversing the roles from a season ago when Longview made the plays down the stretch in a pair of wins.

Rodgers, who hit his stride late in the game, made plays both with hiis legs and his arm as the Panthers outscored the Lobos 14-3 in the final quarter.

“He can make plays when we need them and he did that tonight,” Quick said. “We just have to make sure we don’t ask too much of him.”

Lufkin was able to get the win in spite of a huge night from Kendrevian White, who ran for 208 yards and three scores on 27 carries.

However, Lufkin limited the big plays before closing the door on the Lobos down the stretch.

“We have some things we need to fix over there, but I was proud of them,” Quick said. “They kept fighting no matter what happened.”

It was an ominous start for the Panthers as an early miscue gave the Lobos some early life. After the Lufkin defense forced a three and out on the opening series, Lufkin’s offense looked for a quick start.

Instead miscommunication on a snap led to a 36-yard loss that moved them back to their own 1-yard line.

After Longview got good field position after a punt, Kendrevian White took advantage by scoring on a six-yard run that gave the Lobos a 7-0 lead.

The Panthers didn’t take long to answer. Facing a third and 15, Rodgers hit Dhailon Phillips for a 35-yard pass.

That set up Rodgers for a seven-yard touchdown as he dove into the end zone to knot the game at 7-7.

The defenses took over the rest of the way until close to the end of the first half.

After Lufkin missed on a potential go-ahead field goal, Longview drove deep inside Panthers’ territory. However, the Lufkin defense came up with the big play with Ariel Olvera picking off a pass to stave off the scoring threat. 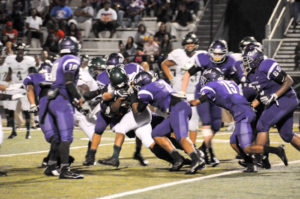 The Panthers defensive line holds the Lobos from a late 3rd quarter rally. The Panthers would eventually win the game, 35-24. (Photo: Misty Boggs)

Two plays later, Rodgers hit a sprinting Malik Jackson for a 74-yard score that gave the Pack a 14-7 lead with just 1:06 remaining in the first half.

In the opening half, Rodgers connected on just 5-of-13 passes while throwing for 128 yards and a touchdown.

Phillips had three catches for 53 yards and Jackson had two receptions for 75 yards and a score.

White was the main threat for Longview with 110 yards and a score on 15 carries. However, Longview was held to a total of 157 yards in the half.

In the second half, Longview got off to a quick start with White scoring on a 15-yard run that evened the game at 14-14.

The Panthers once again had the answer with an eight-play, 75-yard drive. Kahlil Brown, who finished with 81 yards and two scores on 19 carries, finished the drive with a one-yard touchdown run that gave Lufkin the lead at 21-14.

Longview came back with White scoring on a one-yard run on fourth down that knotted the game for the third time at 21-21. 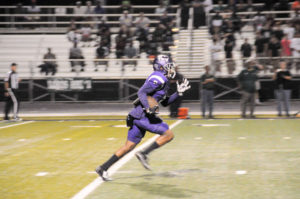 Malik Jackson begins his 99 yard punt return, answering a Lobo touchdown to put the Panthers back in control of their season opener at Abe Martin Stadium. (Photo: Misty Boggs)

Malik Jackson had the immediate answer with a 99-yard kickoff return before Brown powered in four a one-yard run on the next play for a 28-21 advantage.

Longview cut the margin to 28-24 on a Chris Kessler 43-yard field goal.

However, Lufkin was finally able to put the game away on the following drive. After powering their way down the field, Rodgers came through with a 29-yard run on fourth and seven to move the ball to the Longview 3.

Three plays later, Rodgers scored on a six-yard run that virtually put the game away.

Lufkin will be back in action on Friday as it travels to Nacogdoches.