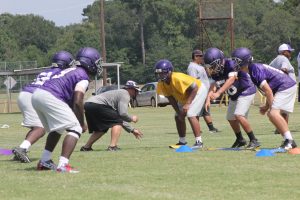 With the temperatures hovering near triple digits, the Lufkin Panthers have hit the ground running in the weeks leading up to the 2017 season.

“They came in ready to work,” Quick said. “We’ve got a good group of seniors that lead by example, and the other guys can follow their lead.”

Quick said one of the biggest keys for the team was the work they put in during the summer when workouts were voluntary.

The Panthers had a solid showing in the state 7-on-7 tournament in addition to plenty of work both in conditioning and in the weight room. That left many players more equipped to deal with the usual August East Texas heat.

“When they came in, they were in pretty good shape,” Quick said. “The skill kids had really good attendance and the kids were able to lead the way throughout the summer.”

Lufkin will wrap up its second week of practice with Friday’s scrimmage in Huntsville before beginning the final countdown for the 2017 season, which starts with a Sept. 1 showdown in Longview.

And while Quick said most of the starting rotation is in place, a healthy bit of competition will only lead to improvement.

“We’ve got a pretty good idea at pretty much every position,” Quick said. “But the kids have to know they’ve got to compete every day because anyone can lose their starting job.”

Following the Sept. 1 opener in Longview, the Panthers’ home opener is set for Sept. 8 against Nacogdoches.