One Town, One Team, Lufkin Proud
Panthers wrapping up second week of practice 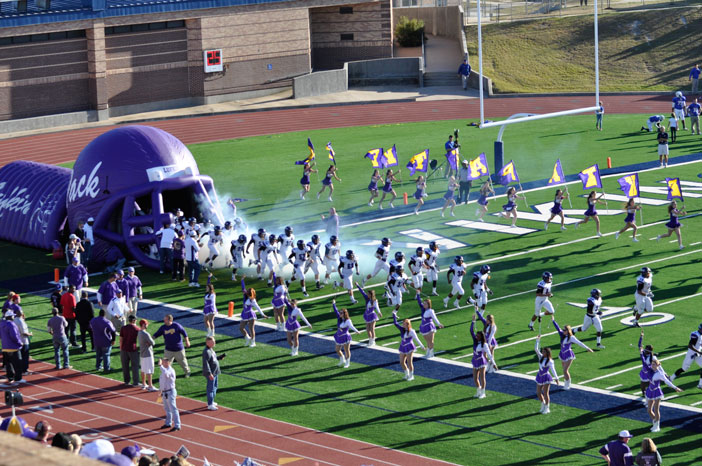 Football season in East Texas brings out plenty of optimism among fans of their local teams. Lufkin is no exception this season as the Panthers are gearing up for what promises to be an entertaining 2016 season.

From a season-opening game against rival Longview to the renewal of its rivalry against The Woodlands, Lufkin fans will have their chance to see the Panthers against some of the best competition around.

Here is a look at the Panthers’ schedule.

Lufkin opened the season with a 21-20 loss in Longview then finished it with a tough 31-10 setback in the playoff opener.

The Panthers are out for revenge this season, although it won’t be easy even at John Outlaw Memorial Field at Abe Martin Stadium.

Longview is the 22nd-ranked team in Class 6A according to Dave Campbell’s Texas Football. They also received votes in the Associated Press poll.

Lufkin was ranked 37th by Texas Football and also received votes in the Associated Press poll.

Longview, which returns only two starters on each side of the ball and lost 44 of 62 varsity lettermen, is still picked to win District 11-5A.

D’Crayvian Polk is the team’s top returning playmaker after running for more than 700 yards last season.

Sept. 2: at Nacogdoches, 7:30 p.m.: Nacogdoches may be out of the Panthers’ district after realignment, but that won’t take the luster off this rivalry.

After back-to-back losses to Nacogdoches, the Panthers brought some normalcy back to the rivalry in 2015 by routing the Dragons, 38-0.

That was part of a 4-6 season for Nacogdoches in which it missed out on the playoffs for the first time since 2012.

This year, the Dragons return most of their starters on both sides of the ball as they are projected to finish third in District 17-5A.

QB Noah Hildebrand (1,693 yards, 16 TDs) and running back Phillip Jones are the returning playmakers on offense.

Sept. 10: vs. Parkway, Shreveport’s Independence Stadium: The following week, the Panthers will head out of the state for a game against Parkway, a traditionally strong team from Louisiana.

Parkway finished 12-2 in 2015, advancing deep into the playoffs.

Parkway won their 2015 game at Independence Stadium, rolling to a 47-27 win over Class 4A Gladewater.

Sept. 16: vs. Monterrey Tech, 7:30 p.m.: After getting a taste of out-of-state action, the Panthers’ next opponent will come from out of the country when Monterrey Tech visits Lufkin.

Monterrey Tech is a team that traditionally makes a trip to Texas to take on talented teams. It will be the first time Lufkin has taken on a team from out of the country.

Sept. 23: vs. College Park, 7:30 p.m.: Lufkin’s return to district action in 6A football will kick off when it renews its series against the College Park Cavaliers.

The Panthers had College Park’s number when they shared the same district as the Cavs never picked up a win in a head-to-head matchup.

College Park will look to change those fortunes after a season in which it made the playoffs despite a 3-8 record.

The Cavaliers, who are led by head coach Richard Carson, return five offensive starters although they will are looking for experienced playmakers.

This season, the Cavaliers are picked last in District 12-6A.

Sept. 30: at The Woodlands, 7:30 p.m.: Just like in previous seasons, this game will probably end up deciding the district championship.

The Highlanders are coming off a season in which they went 10-2 and advanced to the second round of the playoffs.

The Highlanders have plenty of returning firepower with seven players coming back on each side of the ball.

However, the highlight for the Highlanders will be returning seven players off a defense that allowed fewer than 10 points in seven of 12 games last season.

Oct. 14: vs. Beaumont West Brook, 7:30 p.m.: West Brook, a team that was formerly a scrimmage opponent for the Panthers, should now be a formidable district opponent.

The Bruins were a playoff team with a 6-5 record last season before being knocked out in the opening round of the playoffs.

They lost the majority of those players but still have Joel Denley, a 1,200-yard rusher from last season, coming back.

West Brook is picked by Texas Football to finish in third place in the district.

The War Eagles are in their fourth season under former John Tyler head coach Dereck Rush and will have 12 returning starters from a 4-6 team this year.

This season, Oak Ridge is picked to make the playoffs as the fourth-place team in 12-6A.

Oct. 28: vs. Conroe, 7:30 p.m.: Senior Night for the Panthers will come against a Conroe team that is picked to finish near the bottom of District 12-6A.

Conroe was a 4-6 team last season and returns eight players on the offensive side of the ball. Colby Kizzie returns after throwing for 1,700 yards last season.

The biggest key for Conroe may be if it can improve on the defensive side where it returns five starters.

Nov. 4: at Montgomery, 7:30 p.m.: Montgomery is picked to finish near the bottom of 12-6A thanks in large part to returning only three starters on each side of the ball.

Last season, Montgomery was a 5-5 team that missed out on the postseason. This season, the Bears are picked to finish in fifth place in the district.