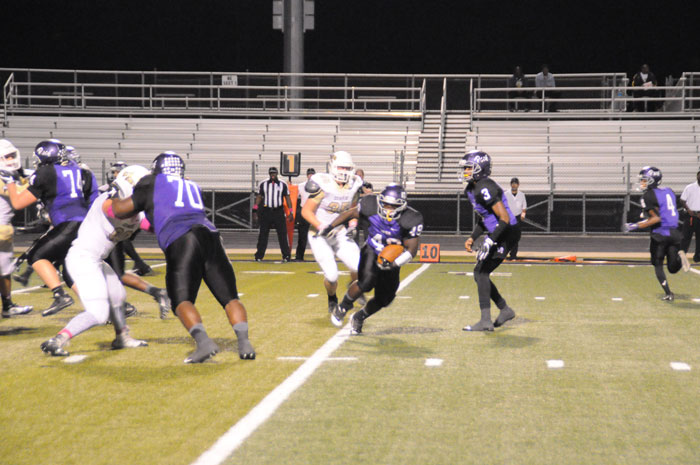 With a playoff spot on the line and the Lufkin Panthers playing in front of their home crowd on Senior Night, an outmatched Conroe Tigers’ squad never stood a chance.

Senior QB Kordell Rodgers had another banner day and the defense rose to the occasion for the second straight week as the Panthers captured a 34-21 victory over the Tigers at John Outlaw Memorial Field at Abe Martin Stadium.

Rodgers threw for 264 yards and two touchdowns on 17-of-28 passing as the Panthers wrapped up the second seed in the Class 6A Division II playoffs with a week still left in the regular season.

They will open the playoffs against the John Tyler Lions in two weeks.

The 13-point final margin wasn’t nearly as close as the score would indicate.

“I’m proud of the kids tonight and they need to enjoy the win,” Lufkin head coach Todd Quick said. “I was a little disappointed with how we finished but very pleased with the effort. It was good that everyone got to play on Senior Night.”

Tre Grant led the Panthers’ running attack with his first 100-yard game of the season. He finished the night with 105 yards and a touchdown on 19 carries.

He got enough carries and I thought he ran north and south really well,” Quick said. “I was really happy with the kids that came back tonight.”

The defense told much of the story for the Panthers as they held Conroe to a total of 274 yards. They shut out the Tigers for the first three quarters until the game had been decided.

It was all Panthers in the opening half as they outgained the Tigers 281-90 in the opening 24 minutes. The Panthers scored on their first two drives to set the tone for the night and the defense took over from there in never letting the TIgers get on track.

The Panthers took the opening kickoff and needed only 1:20 to score on a drive that took five plays and 70 yards. The drive was capped when Rodgers found Dhaillon Phillips in man coverage on a deep route. He easily beat the defender and finished off a 38-yard touchdown reception that gave the Panthers a 7-0 lead. 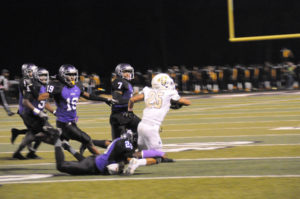 Conroe managed to get a first down before having to punt on the following drive. The Panthers didn’t take long to capitalize with Malik Jackson taking an option pitch and finishing off a nine-yard touchdown run to give the Panthers a 14-0 lead midway through the first quarter.

Lufkin’s defense came up with a takeaway on the following drive with Torrand Grisby recovering a fumble but a 37-yard field goal attempt was well off the mark.

The Panthers’ next drive went to the Conroe 5 before going backwards as Lufkin settled for a Rodrigo Molina 34-yard field goal and a 17-0 lead with 8:51 left in the half.

After forcing another punt, Conroe’s third in the first four drives, Lufkin went back to work with Rodgers connecting with Phillips on his second touchdown of the night, this one from 35 yards out.

However, Phillips left the game with an injury on that play and never returned. He finished the night with four receptions for 101 yards and a touchdown.

The Tigers answered with their deepest penetration of the night on the next drive before turning the ball over on downs at the Lufkin 25.

The Panthers final drive of the half ended with an incompletion on a deep pass as they settled for the 24-0 lead.

Rodgers completed his first nine passes of the game and finished the first half with 223 yards on 13-of-20 passing.

With a big lead in hand and a defensive stop on the first drive of the second half, Lufkin’s offense went to work on the clock in putting together a drive that put the game away.

Going 90 yards on 17 plays on a drive that took more than five minutes off the clock, Tre Grant put the Panthers on top 31-0 with a one-yard touchdown plunge.

Conroe finally got on the board early in the fourth quarter when Colby Kizzie hit a wide open Kelly McFarland for a 37-yard touchdown on fourth down that narrowed the gap to 31-7.

Conroe added another touchdown with 4:27 left as Lufkin mishandled a snap deep inside its own territory to set up an Ameer Patten 11-yard touchdown to make the score 31-14.

The Panthers got back on the board with a long Tre Grant run setting up a 33-yard field goal from Molina to make the score 34-14.

Conroe put one final touchdown on the board when Jon Jones caught a 29-yard touchdown pass on a ball that was tipped by a Lufkin defender, making the final 34-21.

The Panthers (6-3, 3-2) will round out the regular season on Friday night as they travel to take on Montgomery.