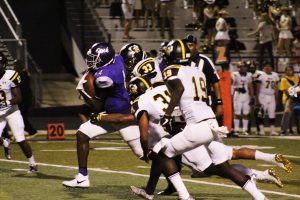 In the season opener a week earlier, the Lufkin Panthers held their own early before fading down the stretch. A week later, it was the Panthers that flipped the script, rattling off 21 unanswered points after a back-and-forth first half on their way to a 38-21 win over the Nacogdoches Dragons in the home opener at John Outlaw Memorial Field at Abe Martin Stadium on Friday night.

Isaiah Phillips ran for 149 yards and three scores and Kewone Thomas accounted for 290 yards and two touchdowns as the Panthers rolled to the win in front of a nearly packed stadium.

“I’m very proud of them,” Lufkin head coach Todd Quick said. “We put four quarters together. We were a little sloppy, but we’ll get it cleaned up.”

Thomas completed 20-of-26 passes to go along with a touchdown and also added a 28-yard touchdown.

That was enough to overcome a solid night from some of Nacogdoches’ playmakers who made it tough on Lufkin early.

However, Lufkin’s defense was able to slow down the Dragons while the offense put up 21 straight points to take control of the game.”

“Defensively we played at a little different speed,” Quick said. “We were rotating more guys in and it wasn’t nearly as hot and humid. But I was proud of the effort.”

The first half featured plenty of back-and-forth action between the long-time rivals with neither team leading by more than seven points.

Lufkin started the game by forcing a three and out before fumbling the following punt. However, Nacogdoches was unable to take advantage as an unsportsmanlike penalty halted its drive.

Lufkin’s first drive then resulted in a three and out that helped set up Nacogdoches’ first score with Marcus Sweat scoring on an eight-yard touchdown run for a 7-0 lead with 3:10 left in the first quarter.

The Panthers didn’t waste any time in getting their offense going on the second possession with Phillips capping an eight-play, 75-yard drive with a five-yard run up the middle, knotting the game at 7-7 late in the first quarter.

The action picked up in the second quarter, starting with a big play from the Nacogdoches defense. When there was miscommunication on a Lufkin pass pattern, Lavenski Simon was in the right place at the right time, easily picking off a pass and sprinting 67 yards for a touchdown that gave the Dragons their second lead at 14-7.

For the second time, Lufkin had a quick answer as Breylon Garcia hauled in a nice 27-yard completion before Malik Jackson took a sweep and went untouched around the corner for a 33-yard touchdown that knotted the game at 14-14 with 9:04 still left in the second quarter.

Lufkin appeared to be on the verge of a go-ahead score when Nacogdoches bobbled the snap on a punt and Lufkin drove inside the Nac 10. However, a fumble was recovered by Nacogdoches, keeping the score tied.

Undeterred, Lufkin’s defense came up with a three and out and a 23-yard punt gave Lufkin the ball at the Nacogdoches 26.

On third down, Ja’Lynn Polk made an 18-yard catch, and Phillips scored from three yards out on the next play, giving the Pack its first lead at 21-14 with 3:57 left in the half.

Nacogdoches had the answer this time on a drive that went 66 yards on seven plays, culminating in James Sowards’ 16-yard touchdown pass from Jake Smith that knotted the game at 21-21 with 37 seconds left in the half.

Instead of running out the clock, Lufkin got aggressive and went after one more score before the half with Titan Williams hauling in a pass from Kewone Thomas and going 51 yards before being pulled down just short of the goal line.

With two seconds left on the clock, Lufkin head coach Todd Quick stayed aggressive and handed the ball to Phillips, who scored on a two-yard run, giving the Panthers a 28-21 lead with just .4 seconds remaining in the half.

The half featured plenty of offensive fireworks with Lufkin’s Kewone Thomas completing 9-of-11 passes for 156 yards.

Phillips ran for 96 yards and three touchdowns on 14 carries.

The fireworks continued early in the second half with Jackson returning the opening kickoff 51 yards. Lufkin made sure that effort didn’t go to waste as it chose to go for it on fourth down with Thomas hitting Tre Grant on a short pass that he turned into a 16-yard touchdown for a 35-21 lead.

Lufkin’s lead grew to 42-21 just 35 seconds into the fourth quarter as Thomas ran untouched for a 24-yard touchdown.

Nacogdoches snapped a stretch of 21 straight Lufkin points when Marcus Sweat scored on a one-yard touchdown run to make it 42-28 midway through the fourth quarter.

However, the Panthers put the game away in the final minutes when Rodrigo Molina drilled a 25-yard field goal, making the final 45-28.