Playoff Seeding Still Up for Grabs in 12-6A
Lufkin vs West Brook is now online – Watch the Ambit Energy game of the week! 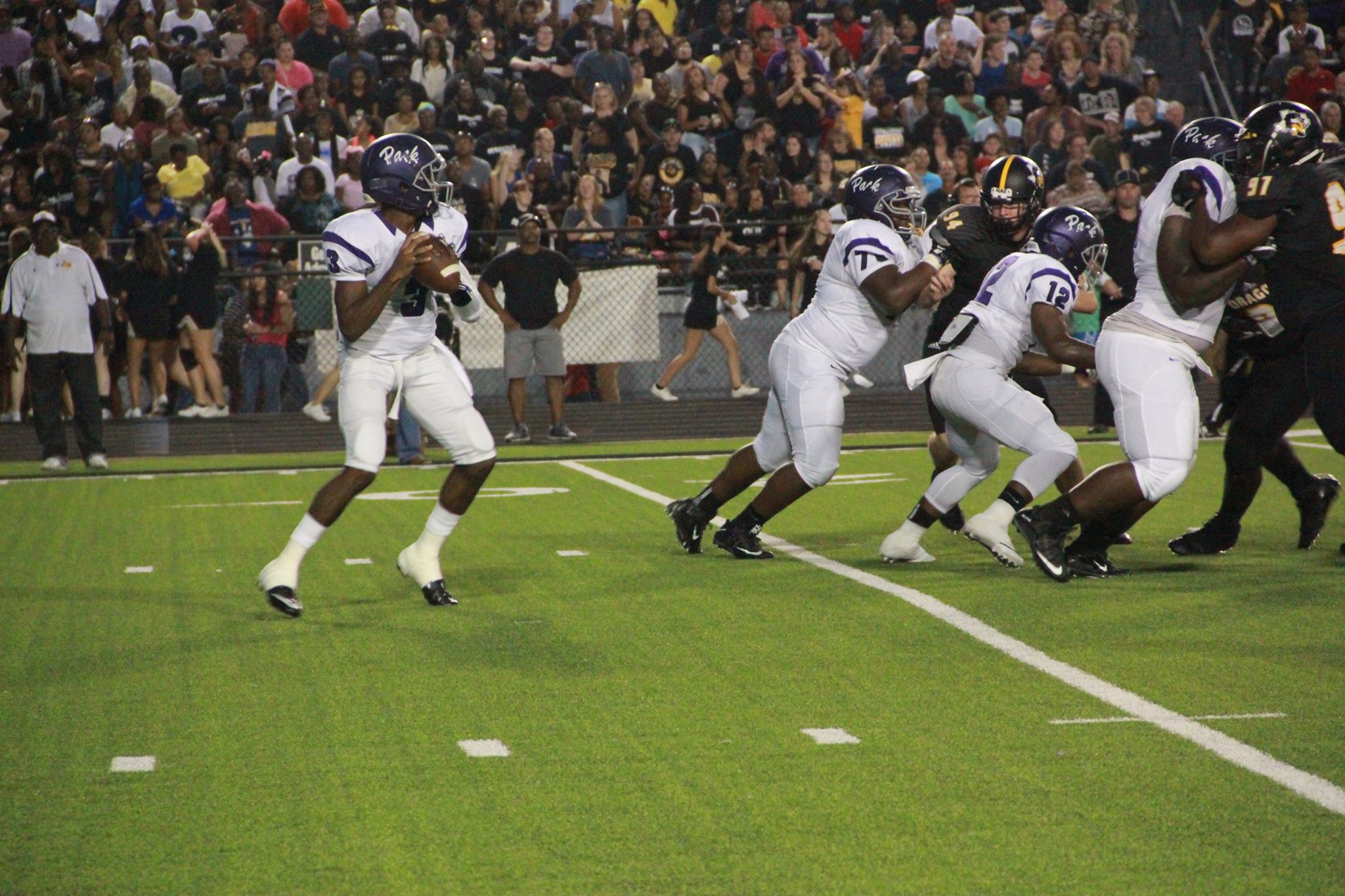 Panther QB Kordell Rodgers steps forward for a pass during the annual match up against Nacogdoches, earlier this year. (Photo: Grace Baldwin)

In his first year as a full-time starter for the Lufkin Panthers, Kordell Rodgers showed glimpses of becoming a true star at the varsity level.

Now as a senior, Lufkin’s signal caller leads the district in almost every passing category and has a legitimate chance to put his name atop the school record book.

In the first seven games of the season, he has thrown for 2,392 yards with 25 touchdowns and only two interceptions while completing 146-of-221 passing.

He is the district leader in yards, touchdowns, completions and attempts. Among quarterbacks who have started the majority of their games, only The Woodlands’ QB Eric Schmid has fewer interceptions (1).

Those numbers are equally as impressive when compared to Lufkin quarterbacks from previous seasons. He already has the seventh-most passing yards by any quarterback in a single season in school history.

Tyler Stubblefield has the school record with 3,582 yards in 2012. The former Texas A&M pitcher set that record while playing 13 games in the Panthers’ run to the regional semifinals in 2012.

If Rodgers keeps up his current pace, he could potentially surpass that mark in the first round of the playoffs.

Other quarterbacks on that elite list for passing yards include Trey Cumbie, Terrance Parks, Jeffrey Claybon and Jeremy Claybon, who is on the list twice.

Rodgers also has the potential to set the record for passing touchdowns in a season. Stubblefield also holds that record from 2012 when he threw for 39 touchdowns.

“The biggest thing for Korell is he hasn’t been stingy,” Lufkin head coach Todd Quick said. “He’s been taking what the defense is giving him. And what he did a good job of last week was pulling it down and running when the play isn’t there. He’s getting healthy and that makes him an even more dangerous quarterback.”

That play has been instrumental for a Lufkin offense that has averaged 47 points per contest. The Panthers scored 63 points against Beaumont West Brook on Friday night and were a play away from breaking 70.

While Rodgers has gotten the spotlight, he has plenty of help around him. Dhailon Phillips has caught 46 passes for 797 yards and six touchdowns. He leads the district in receptions and is second in receiving yards.

Malik Jackson has 31 catches for 743 yards and eight touchdowns. He is third in the district in receiving yards and receptions and second in touchdowns.

In addition, Lufkin has a playmaking threat at running back with Kahlil Brown running for 687 yards and 13 touchdowns on 124 carries.

However, Quick said the biggest key for Lufkin may be the offensive line.

“Coming into the season, that was one of our biggest question marks,” Quick said. “Now they’re playing really good football. They’ve been opening up holes in the running game and giving Kordell a lot of time to get rid of the football.”

The Panthers will get the chance to add to those numbers when they travel to face Oak Ridge on Friday night. That game at Woodforest Bank Stadium is set for a 7:30 p.m. start.